Sometimes, you choose to break the rules ... and sometimes you don't realize you have until it's a thing of the past. You can still remedy the situation ... but I'm getting ahead of myself.

I really do have some self-imposed rules here at Bags by KZK ...but when Shelly asked me to make a very special Deeve Bag for her to give as a gift, I threw a few of them out the window. I mean, they're MY rules, so I can break them if I so choose. :) And it was totally worth it. Here's the bag I did for her: 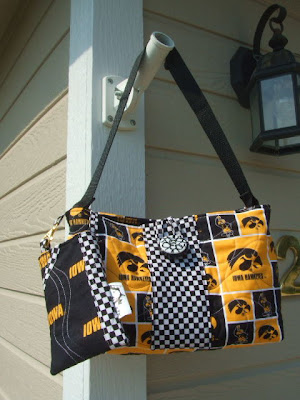 That's right - it's an Iowa Hawkeyes Deeve. Shelly sent the fabs to me. :) The bag is seriously cute, kicky and fun. A bit dangerous in this Kansas State Wildcats town ... but I took the pictures quickly so no one would see the bag. LOL!

Shelly even found a darling button she thought would "go": 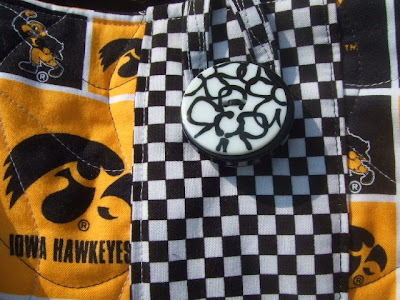 It got a little lost on its own, so I piggy-backed it on top of a huge black button; that seemed to set it off nicely. It was too cute not to include it!

Cute fab for the placket, too, don't you think? I used it as the straps and accents on the Hold the Phone! Bag: 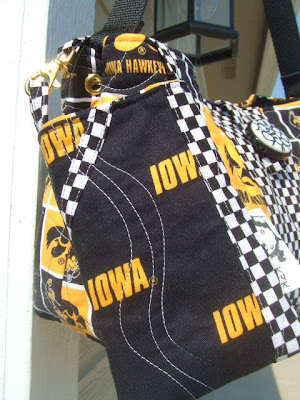 It seemed sort of NASCAR to me, so I put racing stripes down the HTP! Bag. LOL!

Here's a peek inside the Deeve: 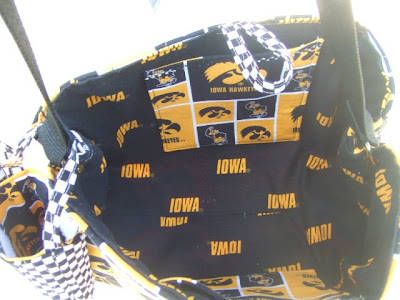 Two nice, big pockets, with cute stitching details done in a variegated black-to-white quilting thread. I couldn't stop laughing after I chose which stitch to use - it was perfect. Check it out: 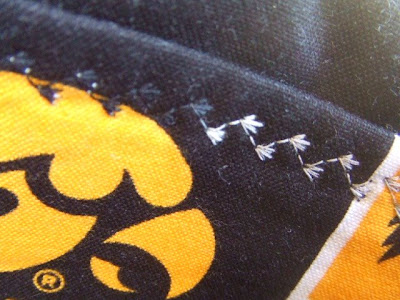 I finished the bag and took all the pictures... then realized there was something missing. Yes, my KZK tag. To go back and put it into the side-seam at this point would have been next to impossible - I'd already hammered in my grommets and everything! So... I "reverse stitched" a bit of the placket and inserted it in the front: 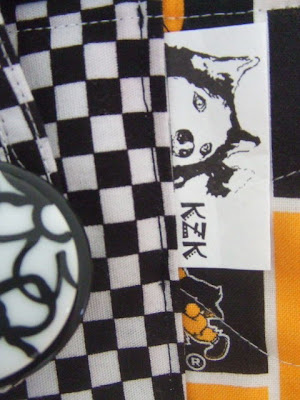 And this brings me to the major "oops". As with any order, I was honored that Shelly chose me for the project and plunged into it. The rule I didn't remember until after I'd broken it has to do with the Iowa logo, the regulations surrounding its copyright, and use of the "officially licensed" fabric. Basically, you can't make stuff out of it and sell it for profit. You may be thinking, "Who would know?" And the answer is, "I would" - and that's enough.

By design, Bags by KZK is basically run at a loss or at maybe a "break even point"; it's pretty much a balance of my need for a creative outlet, the desire to support some pretty cool charities through my donations, and to help resupply my stock of fabulous fabric. :) So... I had already accepted payment from Shelly then I realized I shouldn't have. In order to remedy the situation, I am donating the proceeds from the Iowa Hawkeye Deeve Bag to a very worthwhile charity - the Nowzad Dogs.

A fellow blogger is leading a campaign to help support the British troops who are trying to help the stray dogs of Afghanistan. Please click here for more information. And if you feel so inclined, I'm sure your donation would be appreciated!

Rules broken, and fixed. The important ones, anyway. I think I'm good to go on everything. Unless the neighboring Wildcat fans find out about the Hawkeye Deeve... then I might be in some hot water. ;)

Thanks for reading! Tune in next time for Penny's Z Bag!
KZK