What a great, productive day yesterday! I received an order for a Hold the Phone! Bag from a very special someone, and went right to work on it. He asked for denim mixed with brights, and a leash-style handle for his mom. I shot a picture of some fabs I thought would work, and Andrea gave me the green light! Or the multi-colored light. :)

HTP! Bags are such fun. I can get as crazy as I want to be and it just "works". Here's the front of the bag: 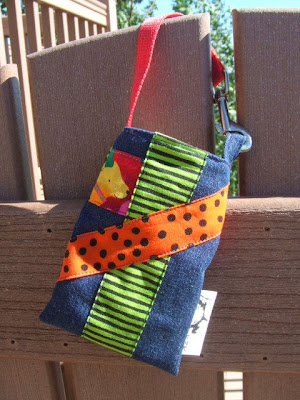 and here's the back: 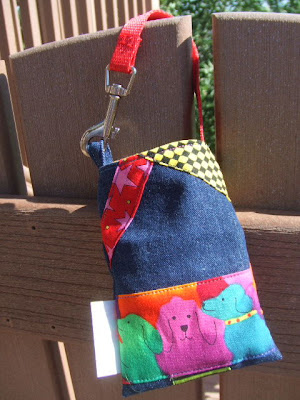 I quilted in a YLI variegated thread - Jewel. I only outlined the appliqués, as I wanted them to take center stage, not stitching.

I attached a special charm and some glass beads that I thought Andrea would like: 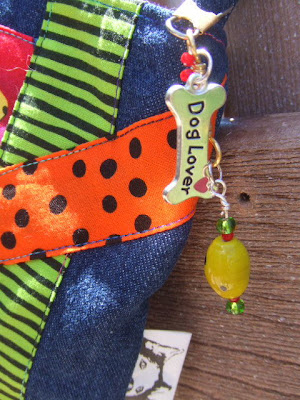 Here's a peek inside. I used some scraps from some favorite Laurel Burch fabs: 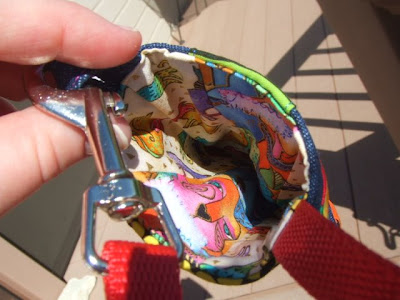 Why shouldn't the inside be fun, too?!?

Speaking of fun, I've been a supporter for the MaPaw Siberian Husky Rescue group in PA for a long time. A few years ago, they took in a very pregnant Sibe who needed a new home - as would her puppies once they arrived and were weaned. I helped out a little bit with a fund-raiser - did a couple mini wall-hangings and pillows with photos of the new mom and puppies on them to be auctioned off. To make a long story short, one of those puppies was our buddy Echo. I'm so happy to have gotten to know his mom now and to count her as a friend. Since all of my guys were so kind to pose with the items I made for the MaPaw auction (you can see one of Amber here and one of Dave here), I thought it would only be appropropriate to have Dave pose with the new HTP! Bag I'd made for Echo's mom. :) Without further ado, here's the Deeve: 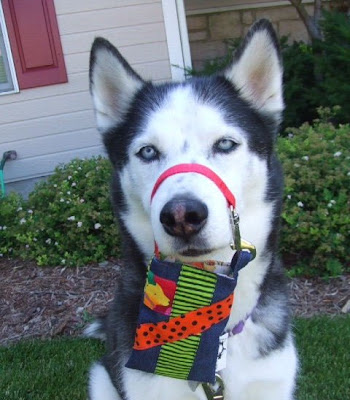 Many thanks for the order, Andrea! I hope you and Echo enjoy your new HTP! Bag!

Getting Back to Rhonda's RAL...

I can't believe how much time has passed since my last post! I've been meaning show you the latest Ram-a-Lamb! This was a special order for a fellow Sibe owner Rhonda, down in Florida. In my last post, I showed you the fab she selected and what my ever-helpful Guide Dog for the Color Blind selected to go with it. Here's how it came out! 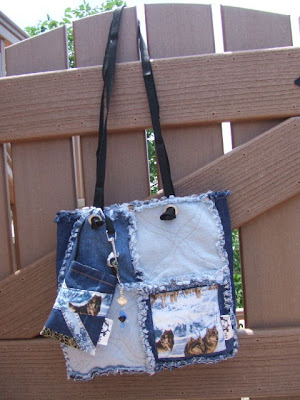 I love how the "wolves in snow" fab looks paired up with the denim! Here's a peek inside: 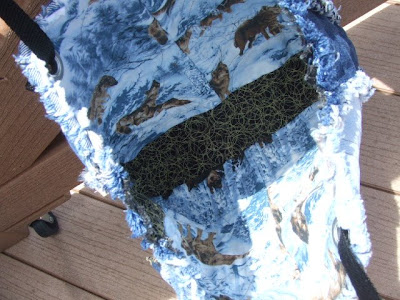 The black swirly fab is on the bottom and sides of the RAL. It helps bring the leashes and wolf fab together! Here's a close-up of the grommet area: 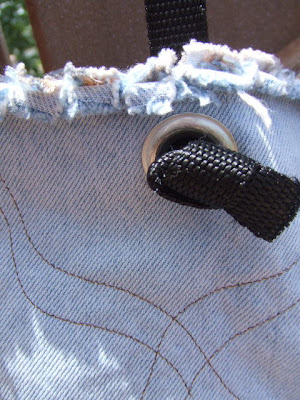 It's my first time using the nickel-finish grommets and I just LOVE them!

Also for the first time, I decided to fray the top of one of the pockets. I think it adds another cool point of interest. Here's a look: 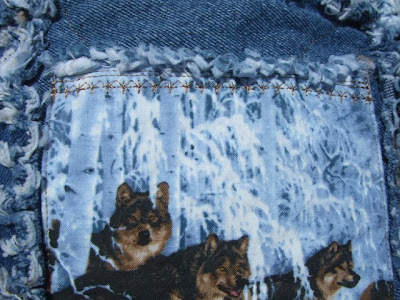 Cool, isn't it? Can you see the decorative stitching, too? I used the thread Zim picked out for me on the tops of the pockets, to quilt the bag, and on the Hold the Phone! Bag. It's a Twister Tweed by Robison-Anton Textiles - Bear Brown color. Here's an even closer look at the other pocket; it gives you a great look at some of the stitching! 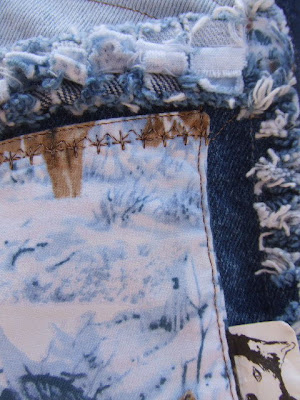 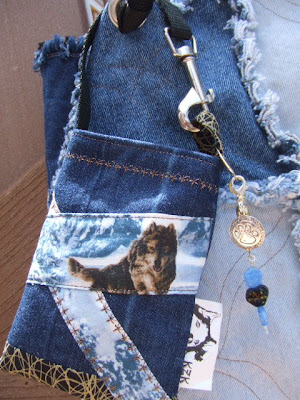 I made the loop the leash hooks into out of the black swirl, too. I added some pretty glass beads and a paw print charm - I think they're a great touch! I did more decorative stitching on the bag, echoing the stitching on the RAL pockets. 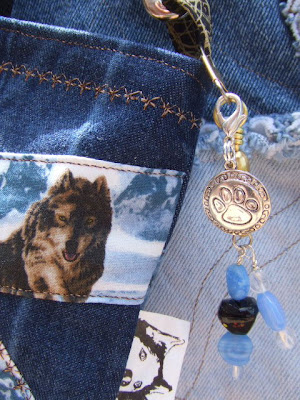 Speaking of Echo... he placed an order for his mom today, so I'll start work on that shortly! :)

One last picture - the inside of the HTP! Bag and a good look at that decorative stitching: 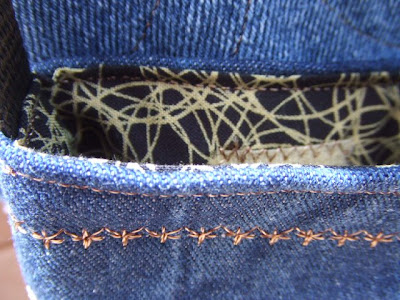 That's it for now! Rhonda, I hope you enjoy your new Ram-a-Lamb Bag!