About That Side Note

Hi everyone!  Sorry I haven't posted for a bit; it's been crazy around here.  I have been very productive in the Studio, though, and thought I'd start showing you what I've been working on.

In my last post, I mentioned being able to see what else I've been playing with in the background of one of my photos.  Yes, another string quilt.  On phone book paper.  ???  I may have an addiction problem.  They are so very good at helping me tackle my scraps, though!

Before I realized just what I was doing, I had several blocks done: 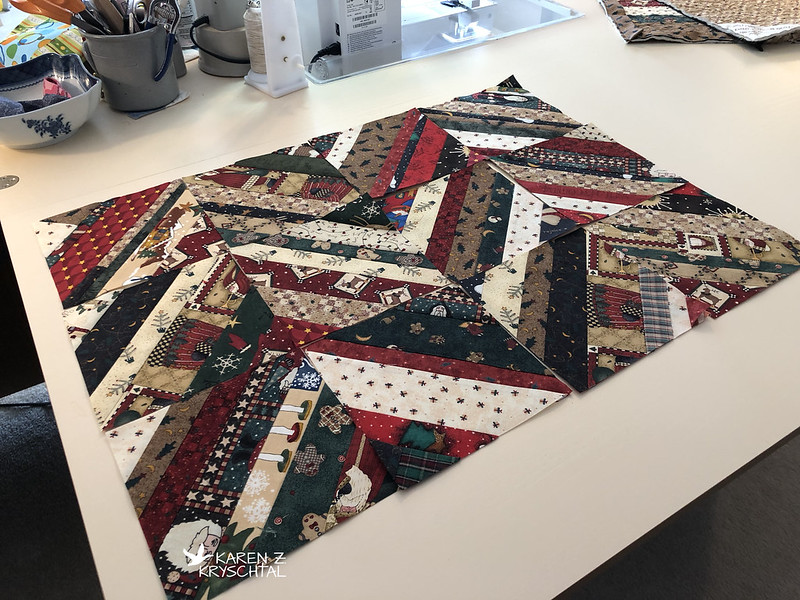 I'd been wanting to make string blocks on the diagonal like this because you can do all kinds of fun layouts.  The only drawbacks are 1) the block edges are on the bias now and 2) you need longer strips going diagonally than you would going straight across the block.  Paper foundation piecing helps deal with drawback number one, and way too many scraps helps combat number two.

I settled on this layout: 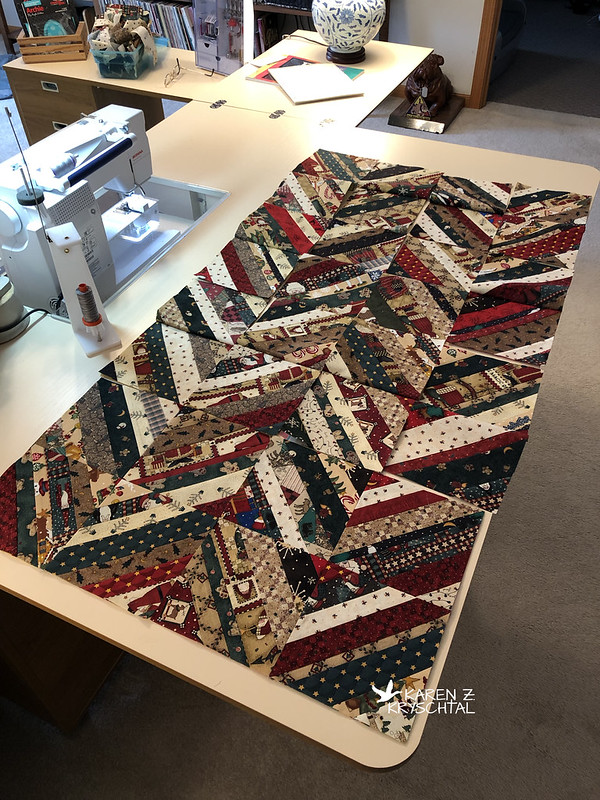 ... then put the whole table runner together in no time. 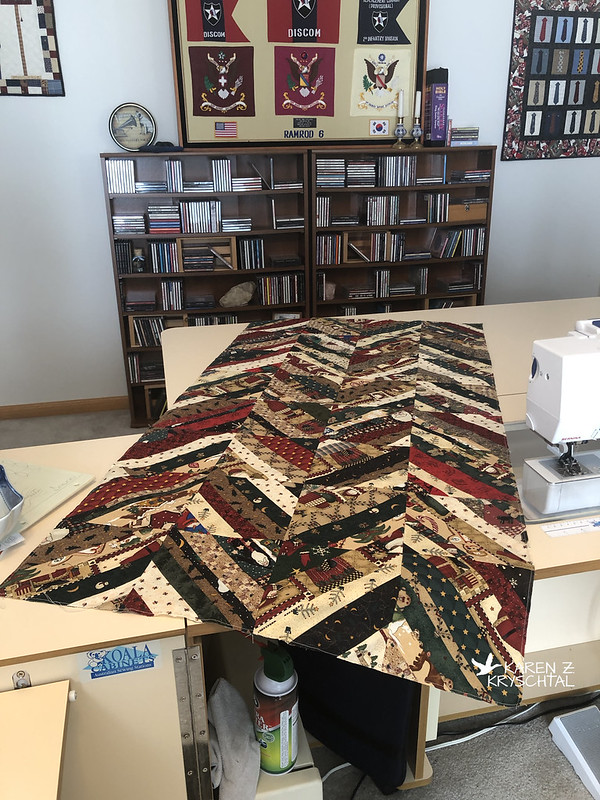 I also stitched all the way around the quilt, about 1/8th of an inch in, so my bias edges wouldn't get all wonky. 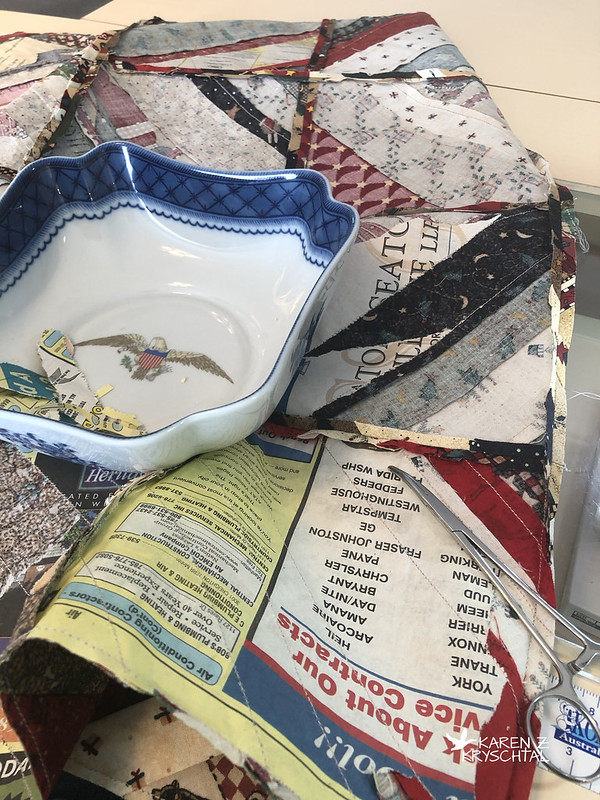 Every time I make one of these, I swear off doing paper foundation piecing -- then find myself doing another.  As I said, I might have an addiction problem.

I sorted through my Christmas fabs and chose the "earthier" ones.  Muted tones.  I'm not sure how to describe them.  More casual?  Whatever.  Here are some close ups, showing some of the darling fabrics.

Before  too many HBO words about the paper  I mean before too long, I was all set to baste! 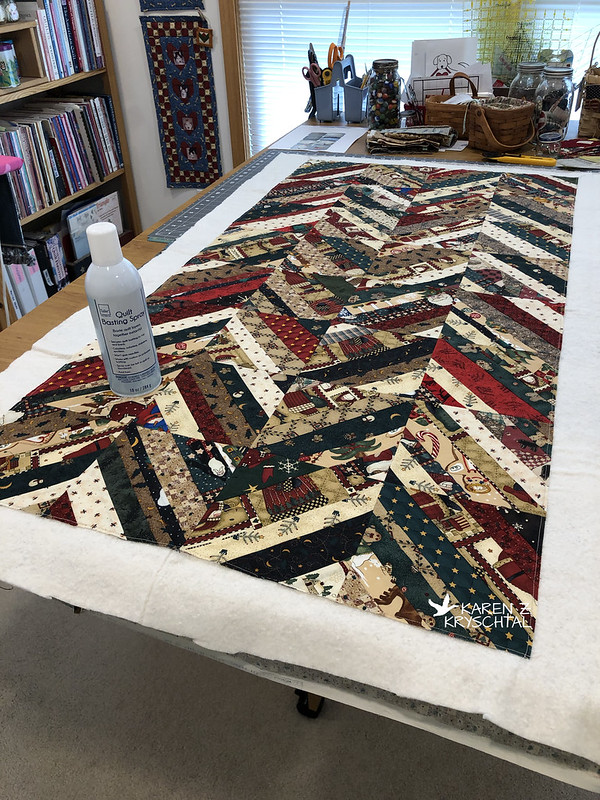 Is it a good sign that I had to order more basting spray?  It must mean I'm getting a lot of quilts done - right?

I forced myself to do some free-motion quilting.  This is a design called "Silly Spirals".  Not perfect by any means, but it was fun and seems to fit the quilt.


The design reminds me of the old-fashioned glass Christmas ornaments - do you know the ones? 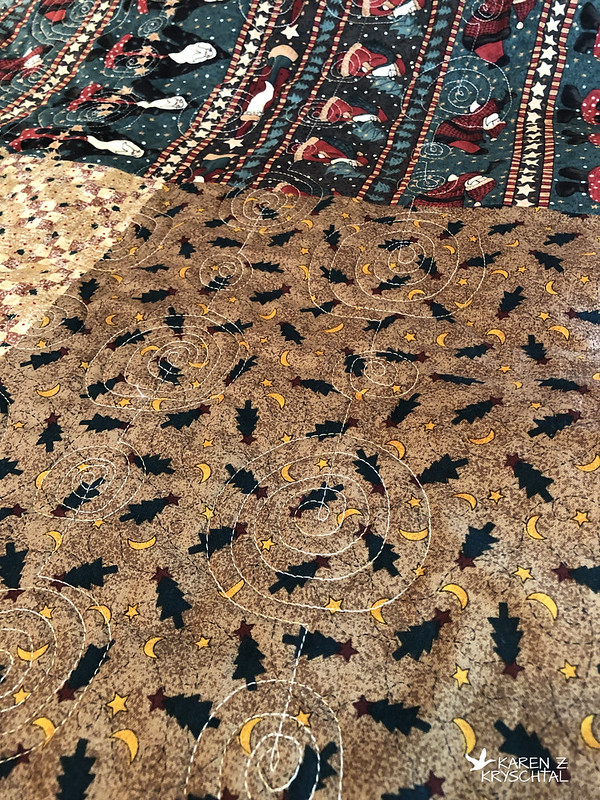 And another look at the back: 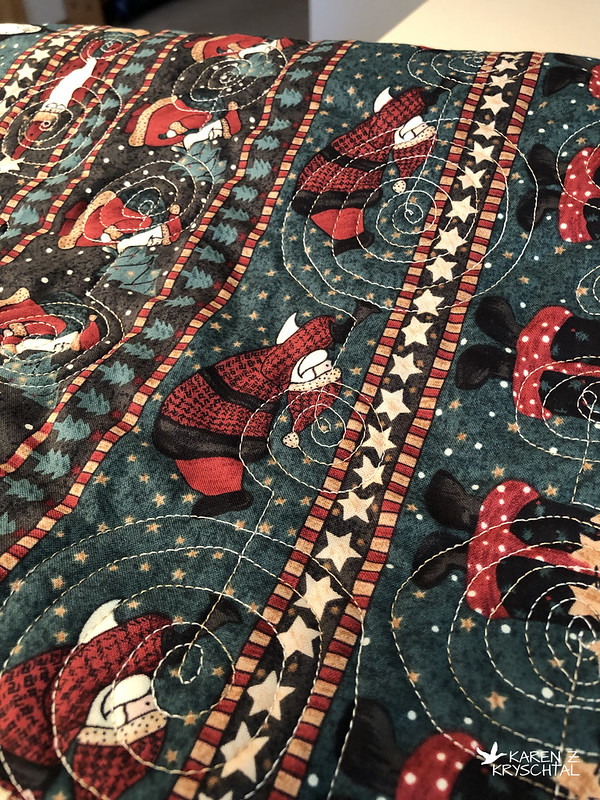 So, yes, the back is pieced, too.  Why not make things interesting!

This is Christmas String Quilt 2, I believe.  Very fun.  And I'm glad I forced myself to do some more free-motion quilting.  It's now in the stack of "doing the hand sewing part of the binding" quilts in the dining room.  AKA the Auxiliary Quilt Studio.  LOL.

Thanks for reading!
KZK
Posted by KZK at 3:12 PM 2 comments:

Diamonds Are A Girl's ... Challenge

Hi everyone!  You know how it is, you go onto Pinterest looking for that recipe you wanted to try and get distracted by EVERYTHING.  Especially quilt-related tutorials, in my case.  When I was making one of the bird blocks, I thought I'd elongate the body by doing half-rectangle triangles (HRTs) instead of half-square triangles (HSTs).  What a FAIL.  Then came my Pinterest session ... and I saw tutorials for HRTs, touting how "easy" they were if only you made them "this" way.  I had to try!

I tried the one at this link first.  I thought I had a bunch of 10" squares in Christmas fabrics that I could play with.  Rather than re-read the tutorial, I thought I remembered the cutting directions just fine and started.  Only I cut wrong.  It really shouldn't have mattered - as long as I had rectangles.  Right?

I did a bit of this along the way:


... but really, it's a pretty good tute. I just messed up.  Following the directions might have helped.  Ha ha ha.

I came up with some slightly wonky blocks: 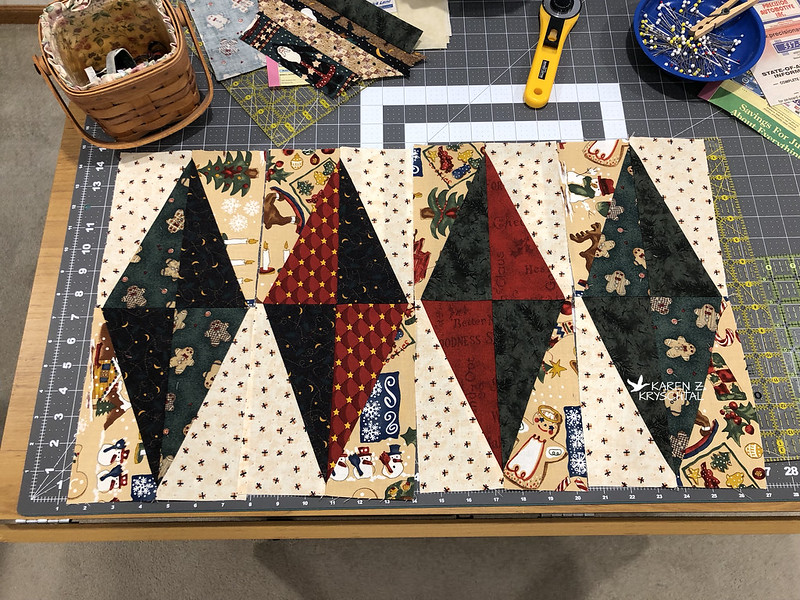 For a first attempt, though, they aren't too bad.

Side note:  Yes, if you look in the background of the shot above, you can see what else I've been playing with.  Since I dug into the Christmas fabric, I realized I have a ton of scraps I need to use up there, too - so I started a paper foundation/phone book quilt.  I've got to use things up!!!

Anyway ... then I stumbled onto another HRT tute, done quite differently, and with a sweet, little twist! You can find it at this link. She gives very thorough instructions, to include which way to press your seams, so they snug up nicely. She also gives directions if you have a specialty ruler AND if you don't. Very nice! 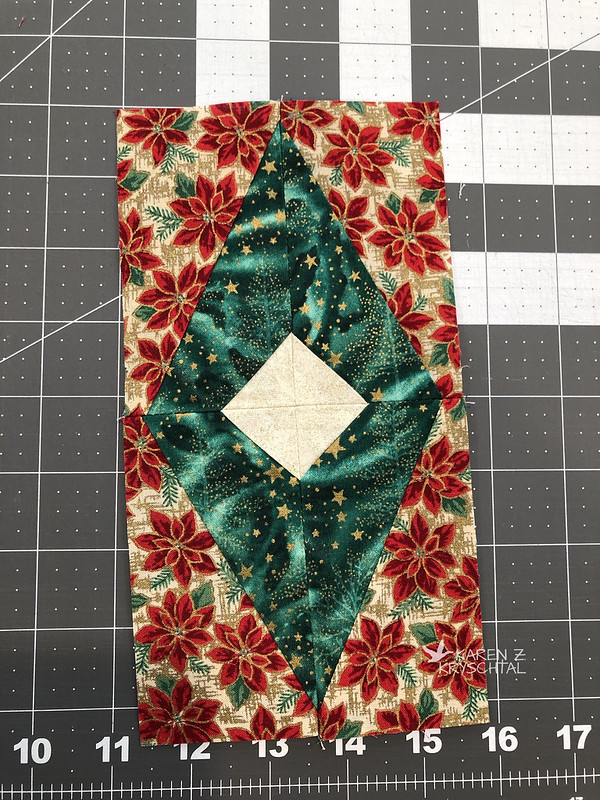 Isn't that on-point square in the center a fun touch?!  You could easily leave that out, but it adds even more panache, if you ask me.

I do have the specialty ruler she used.  It really helped with the squaring up process.  Or is that "rectangling up"?

Oh, why not - right?  Hi everyone!  As I think I've mentioned, I'm trying to do two things right now:  use up scraps and/or finish old projects AND improve my free-motion quilting skills.  ...or lacking thereof.

I've been sandwiching together fabrics I probably shouldn't have in my stash to begin with - cheap fabrics, fabs that might not be 100% cotton, and overall "what was I thinking" pieces - and have been practicing my free-motion quilting on them.  It's been very good practice, and there is no fear of messing up a project I spent who knows how long piecing.

Then, as I was going through my stack of unfinished projects, I came upon this: 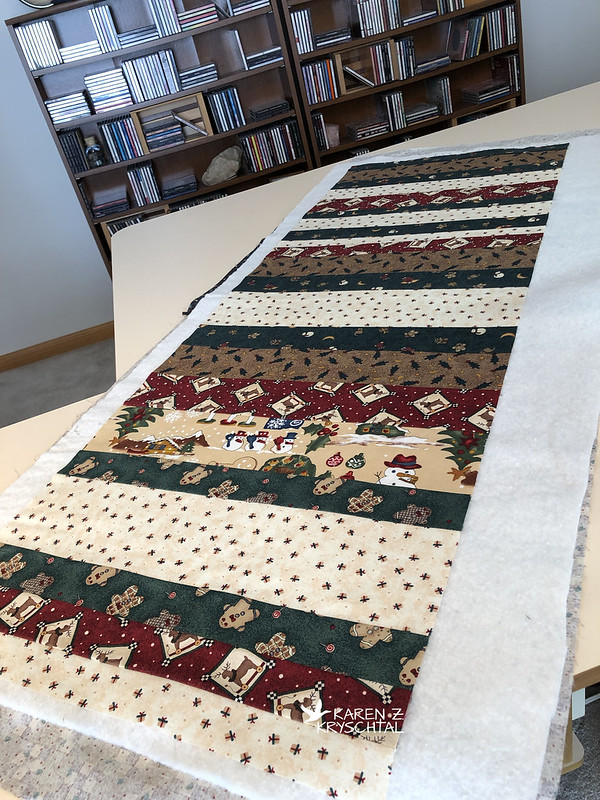 Ooh! I started to pieced this string-style quilt ... I'm not sure when. I thought now that I'm feeling a bit more confident with my quilting, this would make a cute table runner! And honestly, if I messed it up - it's just scraps anyway. Awesome!

I went with the BSR (Bernina Stitch Regulator) and did a new-to-me design I'm calling Double Loops. 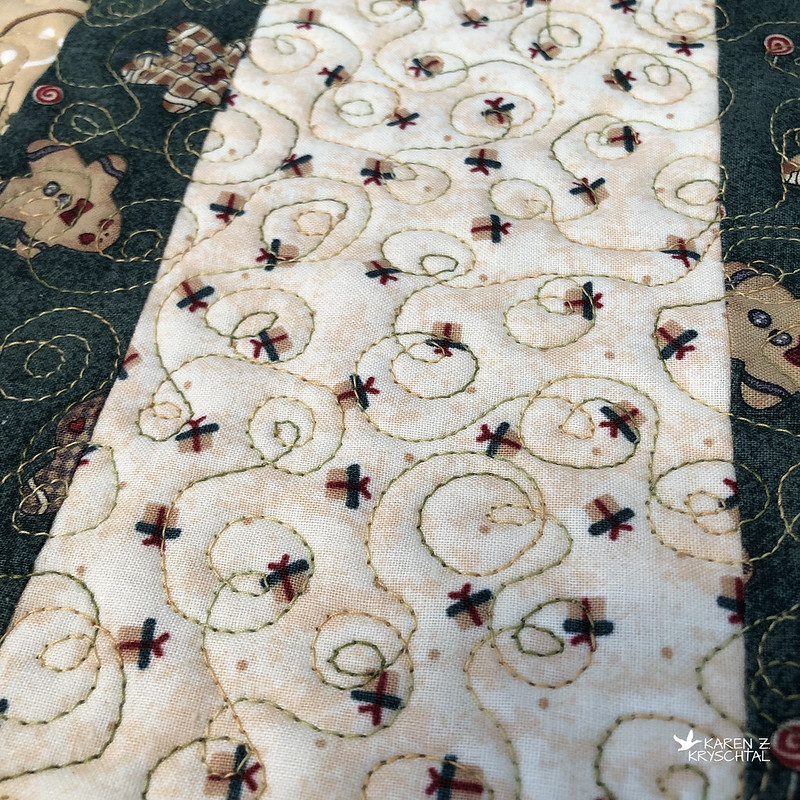 Not too bad! I really like the design -- and of course the THREAD!!! King Tut Nile Crocodile. It's sages and golds, according to Superior Threads' website. Not a color area I am comfortable in, but it really seemed to work with all the different fabrics in the table runner!

Thanks for reading! Stay tuned for diamond-a-palooza!
KZK
Posted by KZK at 11:44 AM 1 comment:

Ever since a friend mentioned the theme to The Partridge Family, it's all I "hear" when I look at these blocks now.  ANYWAY, remember the Surfing Bird?  He's had a few friends join him.

Here he is with the Bluebird of Happiness: 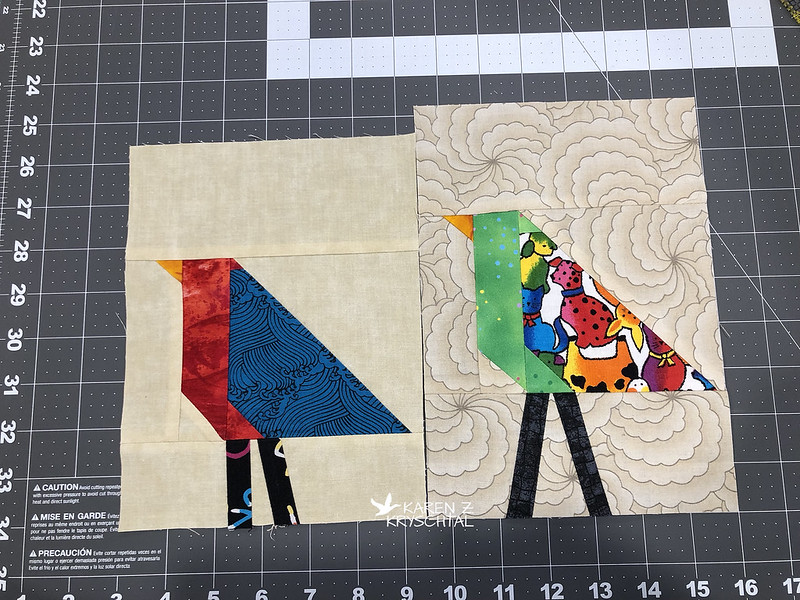 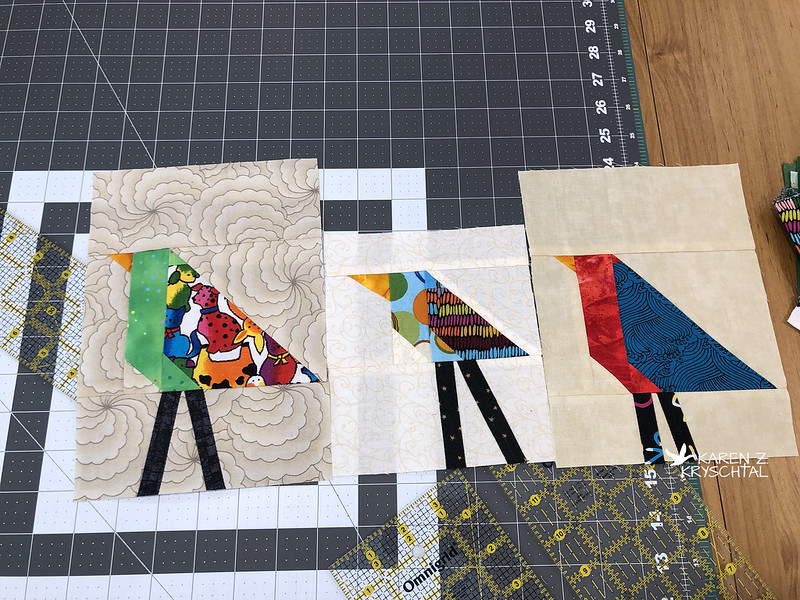 I'm not sure what kind of bird it is. Large, thick bill, long legs, sort of thick body.  Almost like a Dowitcher, only very colorful.  I'm entertaining suggestions for names.

That's the current line up.  I'm doing these sporadically, just to play with scraps and to amuse myself. Lots more to catch you up on - I hope to post more again this weekend!

Hi everyone!  Let's join Mr. Peabody and Sherman and step into the Wayback (WABAC) Machine once again!  I'm still trying to not start TOO many new things and work through my huge pile of unfinished projects. 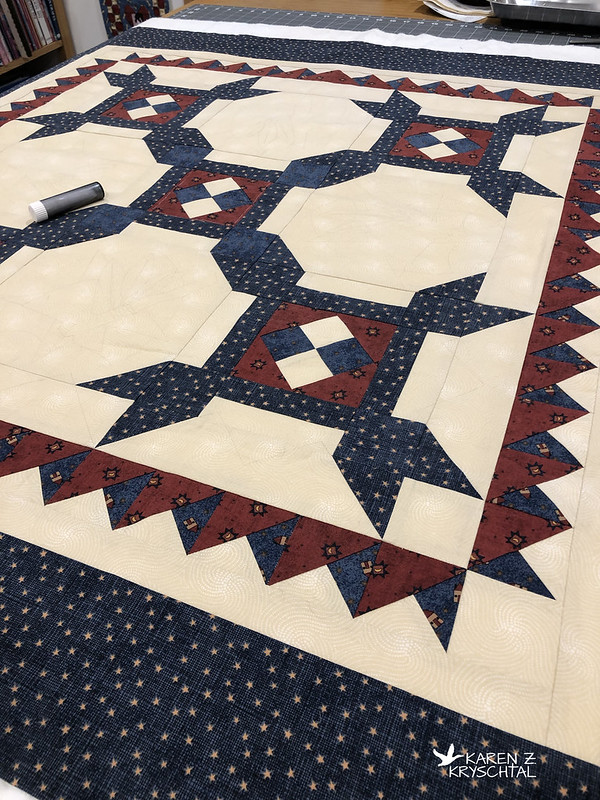 As I understood it, the name of the block I started with (there are 5 interlocking blocks) was called Coxie's Camp -- and also Casey's Camp. At the time, my husband was a brigade commander in the Second Infantry Division (2ID) and was stationed and living at Camp Casey! (I lived in Seoul, on Yongson Army Garrison; spouses were not authorized to live "up north" at the camps.)  I thought it was a cool coincidence - Casey's Camp/Camp Casey - so I had to make it into a quilt somehow.

The pieced border represents the mountains around Tongduchon (or Dongducheon), the town outside Camp Casey's gates.

I had drawn a design in the 4 large buff-colored spaces - taking artistic license with the 2ID unit crest and the 2ID patch.  At the time, I was a hand-quilter and thought it would be relatively easy to quilt them.  Well ... yeah.  But I don't really hand quilt much at all any more, so that ship has sailed.

Anyway, for whatever reason, that quilt was put aside.  I really thought it was time - but first --- I needed thread!  Of course, I turned to the King!!! 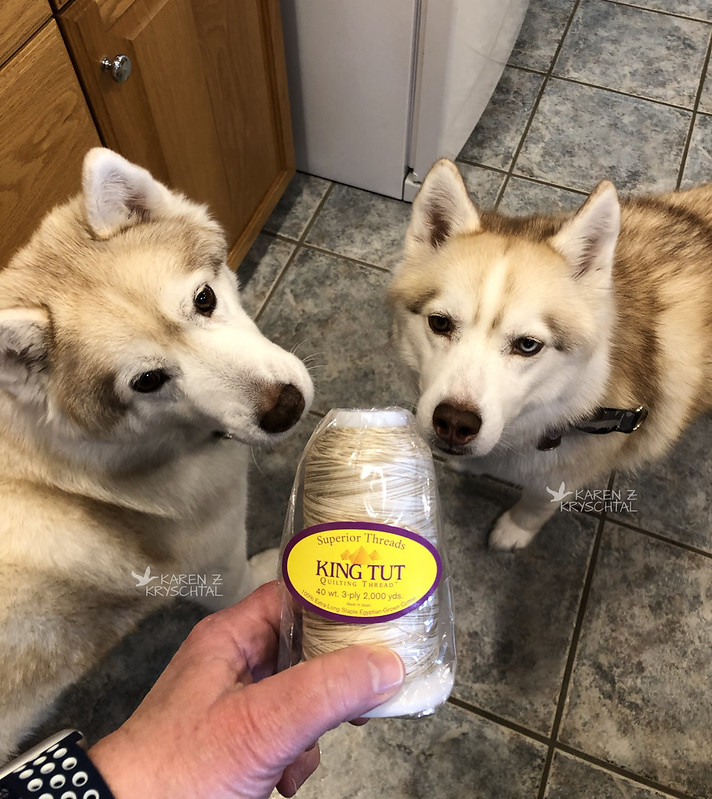 The girls like it! It even matches their fur! 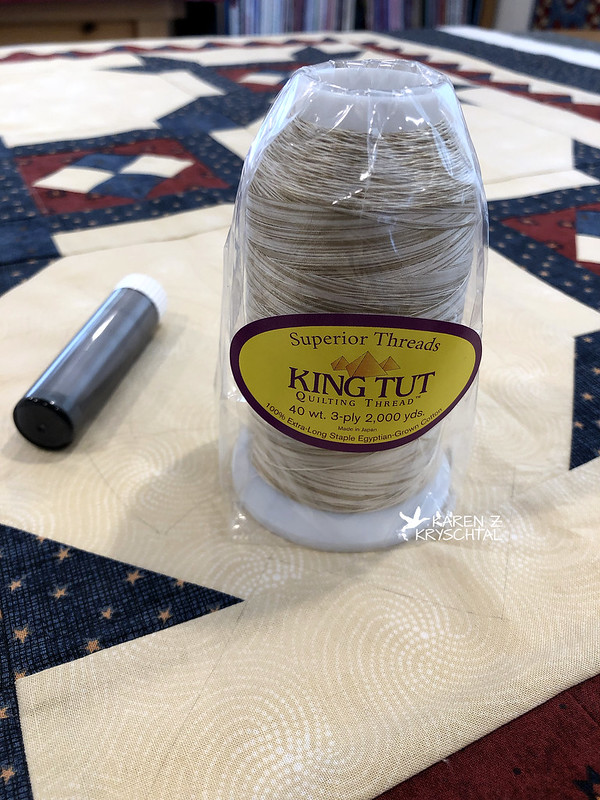 Sands of Time. I've used it before and LOVE all the medium creams. I thought it would be perfect! And now that I have a super-duper cone holder, I could get a BIG one!

I started with some of the straight areas, started doing some twisted ropes, then forced myself to tackle that crest/patch I had designed. 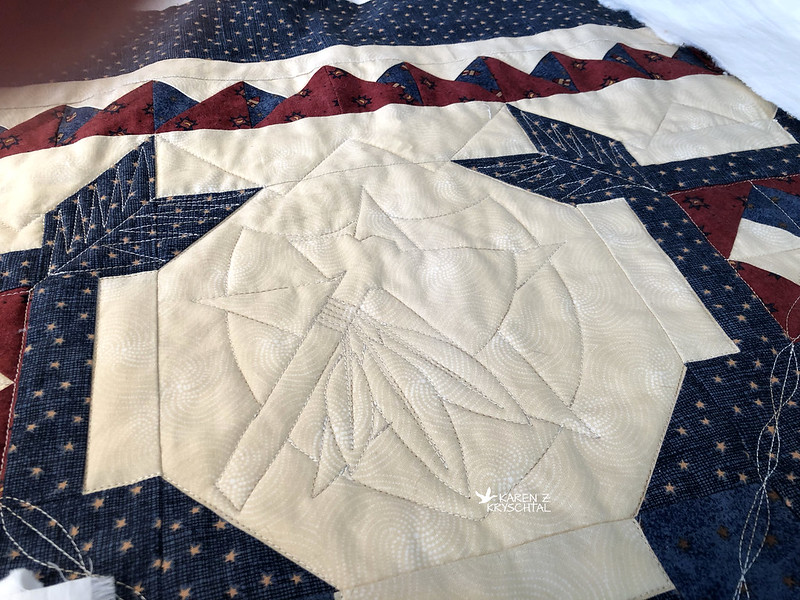 Really not too bad - especially since I did it with my walking foot! BUT, and this was the kicker, I wasn't going to do it four times. No way, no how. I put on my thinking cap and kept going. 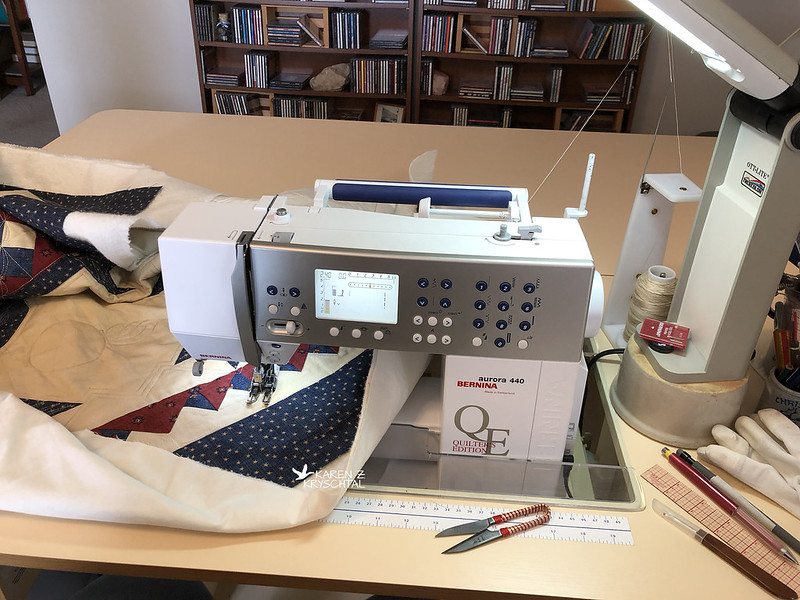 You can see my cone holder there. I love it!

You can also see one of my designs in the large buff areas. I did a large wagon wheel in one, to symbolize the supply wagon. My intent was for that to stand for the DISCOM (Division Support Command), the brigade my husband commanded, then I'd just have to come up with 2 more ideas. When my husband saw it, he thought it was more in line with the Transportation Corps crest ... then said if I just added something to represent the Quartermaster Corps and something for the Ordnance Corps, I'd have the major bases covered. Hmm. Sounded like a plan. (That's the Ordinance Corps bomb you can see in the photo above.) 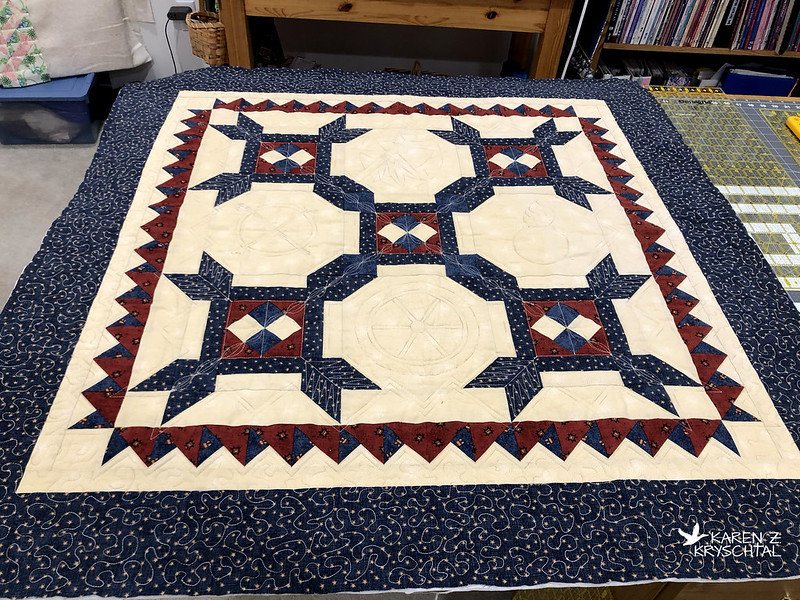 You can more or less see my versions of the crests - oversimplified, but they get the message across.  I'll do closeups later; right now, you can still see the pencil marks from my original 2ID crest/patch composite.  Very messy.  That will wash out.  I hope.  Please.

I did all of that with my walking foot. Yes, I still fear free-motion quilting! I'm practicing, but yikes, it scares me! I did force myself to free-motion meander in the borders: 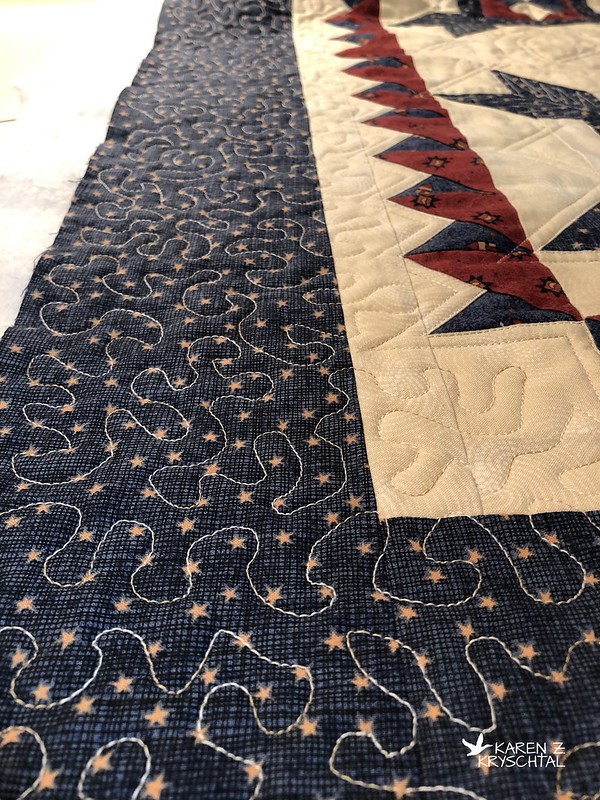 That actually went fairly well. I thought the meandering looked reminiscent of camouflage, so it fit the whole theme!

On to the binding! I had a slight hiccup there, as I appear to have made an apron out of the fabric I was going to use for the binding. Oops. No problem. I had a little left, then added some of the other blues and the red.

The houses on the blue fabric are just about the color of the house I lived in on Yongson; I thought that was kind of funny.

I'm doing the hand-sewing on the binding now; I'll post a shot or two when I'm done.  It feels so good to go back and finish these things!

Thanks for reading!
KZK
Posted by KZK at 1:43 PM 2 comments: