I currently have several projects that I'm working on.  I like to strike while the inspiration iron is hot, then when I'm not feeling totally creative, I can do things like sew on binding.  I had been wanting to try the "Wonky Star" pattern/technique out, so somewhere back around Thanksgiving, I started playing around with it.  That long ago?  That doesn't seem right, but that's what iPhoto has for me.  Ooops.

I grabbed some fabric and thought I'd just play with it and if it didn't come out right, I could turn it into a quilt for Zim and Dave.  (I had kind of planned to make them something with that fab, anyway.)  I really  wanted to expand my horizons a bit and try the "free form" nature of the Wonky Star out. I can be WAY too structured and Type A-ish WAY too often.  Here's how the first block came out: 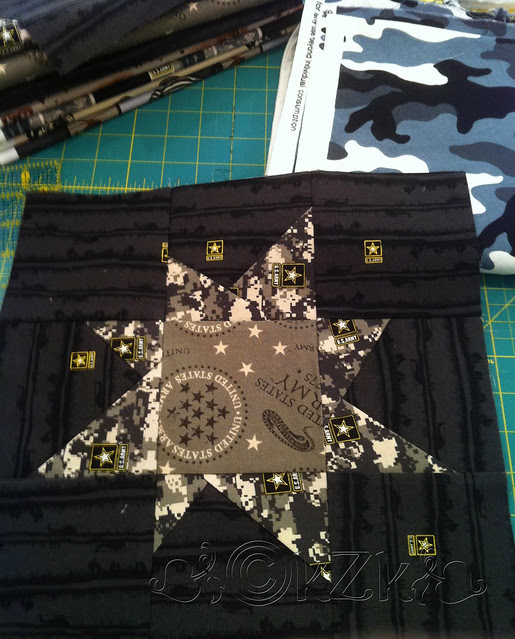 I actually enjoyed the process quite a bit and wanted to make more!  It would be too unlike me to just make star upon star, though.  I needed a cool layout, right?

I decided to put two stars together, having them "share" a background square, and add in a couple setting blocks.  Like so: 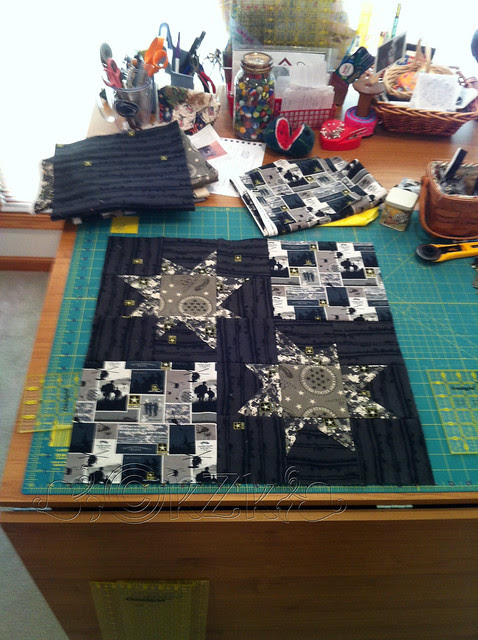 Please excuse the mess on my work table. That was during the Christmas blitz.

I liked my larger block and decided I needed to make 4 of them. That would be a generous size for the boys. 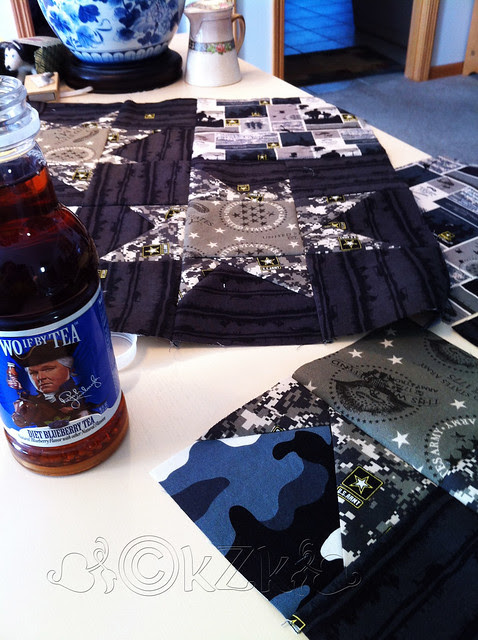 Oh. I ran totally out of the black helicopter stripe fabric. I thought I'd substitute in some black and white camo. You know... because camo blends right in ... right? Moving right along...

I came up with two different layouts. Option 1: 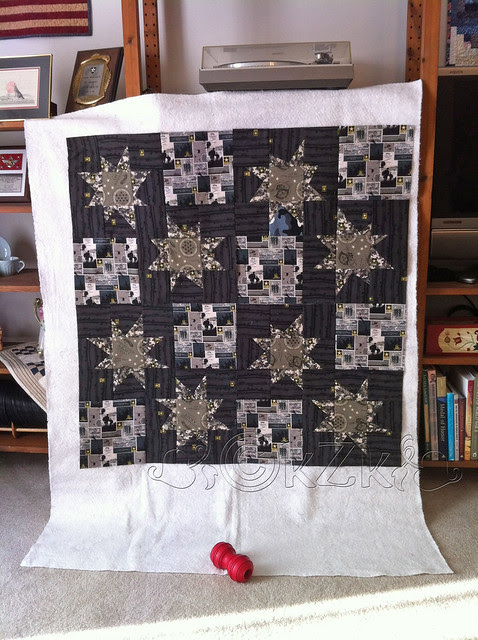 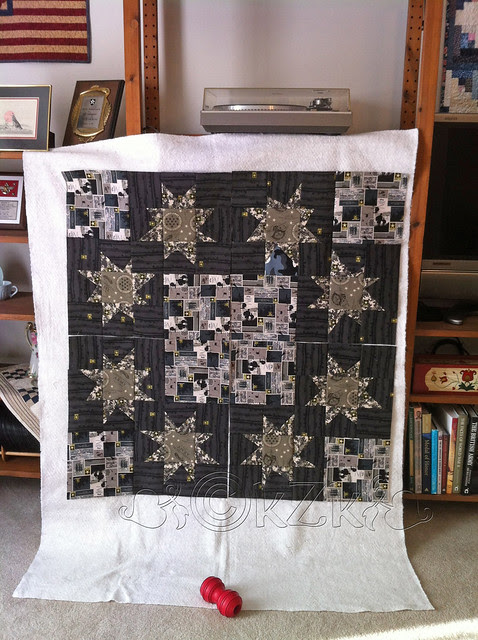 You can tell I was getting help deciding. I ❤ my Guide Dog for the Color Blind!

In Option 1, all the writing on the fabric in the setting blocks is right-side-up and a diagonal movement to the stars.  In Option 2, you have the writing going all four ways -- and the cool circle made by the Wonky Stars.  For a "throw" for the boys, that would be pretty cool.  But I kept looking at it, thinking
a)  that I really liked the whole thing
b)  that the wonkiness of the stars almost needed the structure of the setting blocks all facing the same way
c)  that I was over-thining the whole thing
...and then "d" happened:
d)  my husband saw it, said he really liked it, and we both agreed it would be a cool wall-hanging for a blank wall in his office!

Since it will hang on the wall, we chose Option 1!  Yea!

I've sewn the top together and have it basted together with batting and backing: 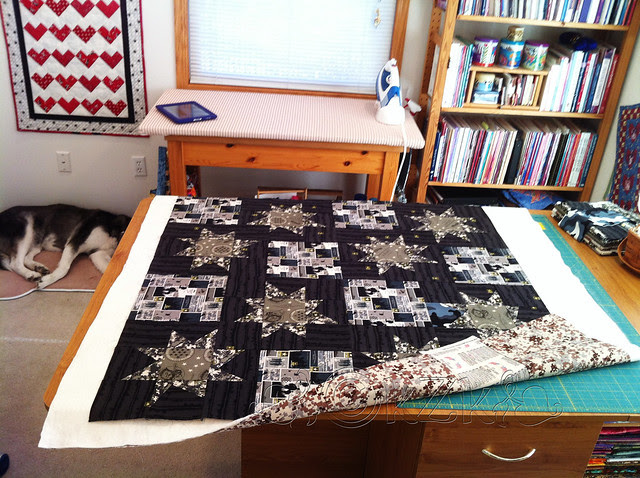 The backing is a digital desert camo print, with a strip of fabric bearing The Star Spangled Banner dissecting it.

I bought the PERFECT King Tut quilting thread and have been practicing the quilt pattern I want to try to do on it.  While I gain confidence that I can pull it off, I'm ... umm ... piecing something else.  Will share soon!

Getting Squiggly With It

A new blogging friend (Cindy) asked about the squiggly quilting on the Magic Nine-Patch Santas table runner I showed you yesterday.  She said she'd like to try it out and wondered how I do it!  I do it a lot.  It's my "go to" quilting design.  Check the top of this basket I made for a dear, dear friend: 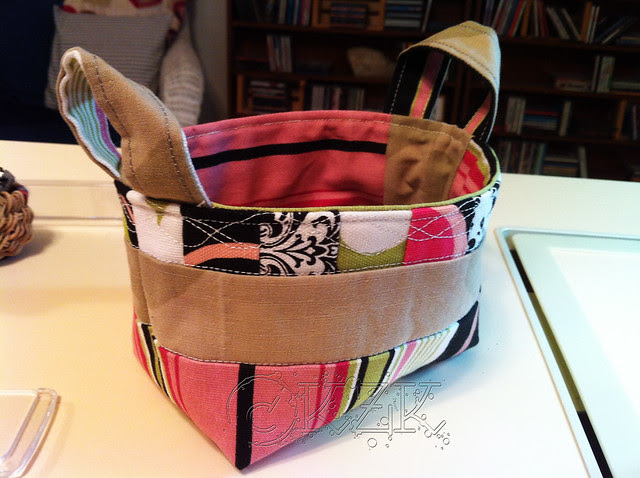 I put a little cable's worth up there at the top.  All I do is use my walking foot! Feed dogs engaged, nothing planned, no thinking, just slide the item you want to quilt under the walking foot and do sort of a bobbing and weaving thing. It helps to sing "La la la la la" while you're doing it, so you stay loose, but if your Studio or sewing space is on the same floor as, say, your husband's office, you might want to sing it in your head.  Or quietly.  Just... ya know.  There will be no video available on this.  Ha ha ha!

If you don't have a walking foot - I highly recommend getting one!  They make them for most machines.  It's probably my favorite foot.  If your layers are secured well, you could probably do it with just a "regular" sewing foot.

And yes, that was another Christmas gift!  Just when I thought I had them all covered!  I made it following the same tute I used for the basket at this link, only decided I could improvise a bit.  I would have done another group of squiggling in the desert camo stripe but, wow! That fabric did NOT like me at ALL! Maybe I was using the wrong needle ... maybe it's the rip-stop fabric ... I'm not sure, but I stuck to the canvas parts of the basket.  I LOVE how it came out - and REALLY loved giving it to my friend -- especially because I got to give it to her in person!!!

Thanks for reading!  And Cindy, I hope you give it a try!  Just remember the "La la la la la" part and it'll all come together.  :)

Ha ha ha.  I crack myself up sometimes.  (Please see title of this post...)

OK... so where was I? I sent my sister a very cool table runner I had made.  I decided she needed a cool fabric basket to go with it, too. Years ago, when I lived in Korea, one of the other wives went to Thailand for Christmas (?) and brought home the CUTEST fabric baskets for the rest of us. They laid totally flat, but have ribbons at the corners to tie ... and when you do, it becomes a cool basket. I've used mine every year since for Christmas cards. I thought I could mentally dissect it and make one for my sister to go with her runner. 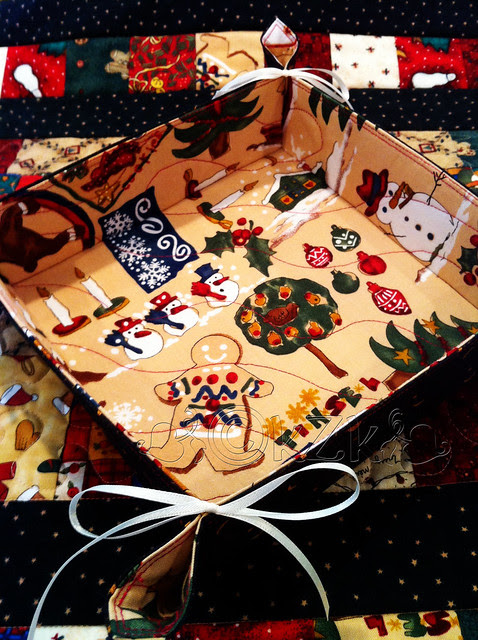 I call it a "Thai Basket". Ha! Get it? Thai - Tie?  I know ... I'm easily amused. It was so easy to mail, too. Very cool. Of course, the whole thing would have been MUCH easier if I had found this tutorial (look for Morning Call Table Toppers) BEFORE I made the one for my sister ... but hey! It was a good mental exercise figuring it out myself. Right?  Yeah...

So ... remember the Santa table runner I made a là Magic Nine-Patch?  I finished that before Christmas ... 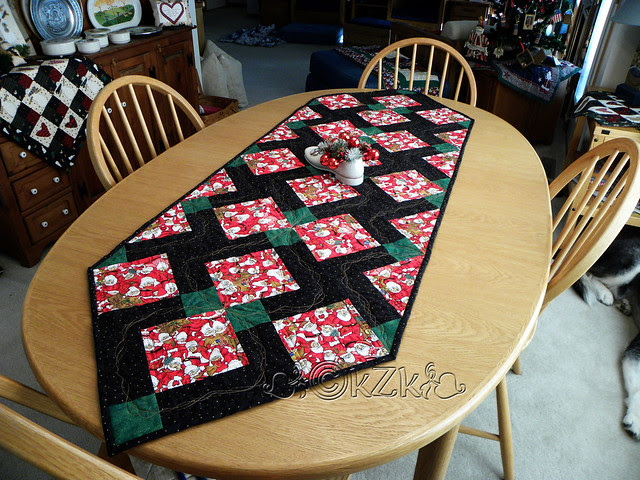 ...and decided it should go to my Mom.  It almost stayed here.

I love how the quilting came out: 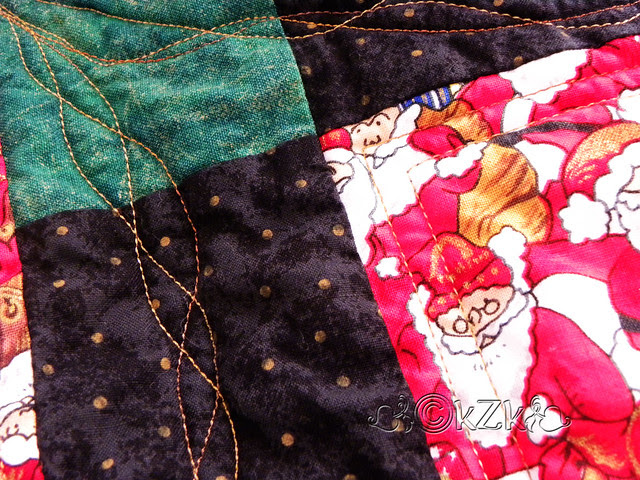 I made sure to label everything - I've been getting way too slack about that lately! 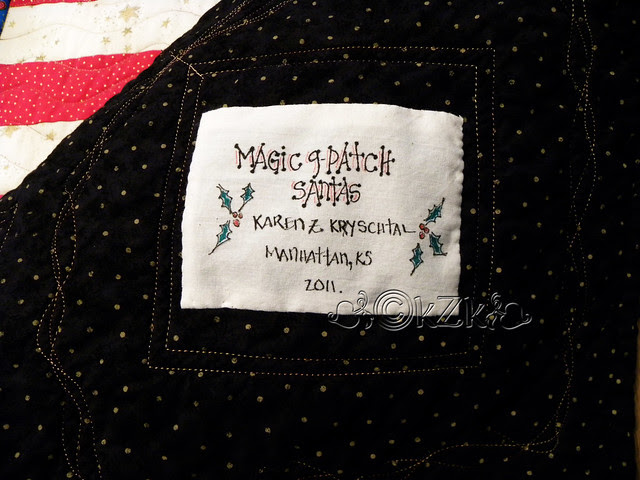 In the background, you can see another table runner I showed you a while ago.  Here - let me lay it out on the table for you ... 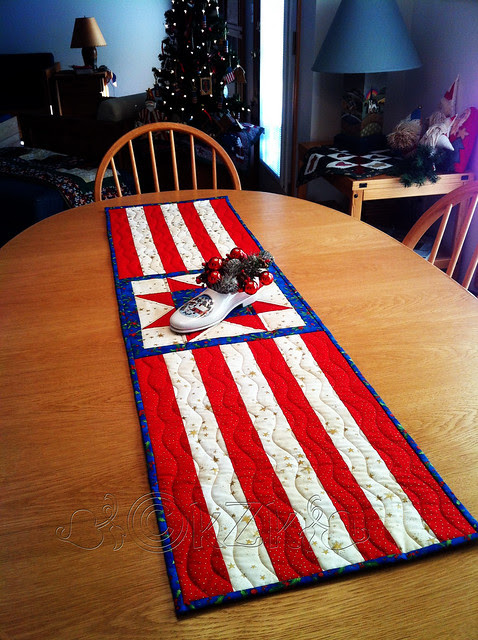 Doesn't it look at home in my dining room? Oh... and see that tree in the background? That's our patriotic ornaments Christmas tree. Makes the table runner seem even more at home, doesn't it? I thought so, too.  So did the hubster.  So... um...  Merry Christmas to us!  Hey, why not, right?!?

Hope you find some inspiration in all of this!  Thanks for reading!

I think I'm going to have several more "Christmas Gift" posts.  I love giving hand-made gifts and did so as much as I could this year.  Still... sometimes there's nothing like getting a gift card to Beth Bath and Beyond (❤ that place!) but I wanted to do a little something extra to go with those.  I found a great tutorial for little gift card holders here and had to make a couple!  Here's what I came up with: 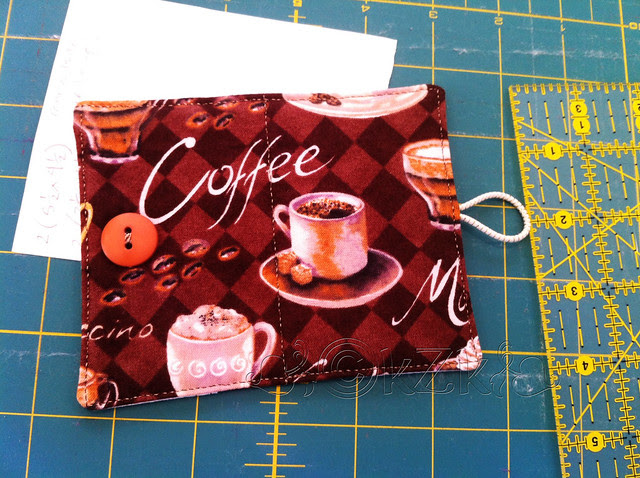 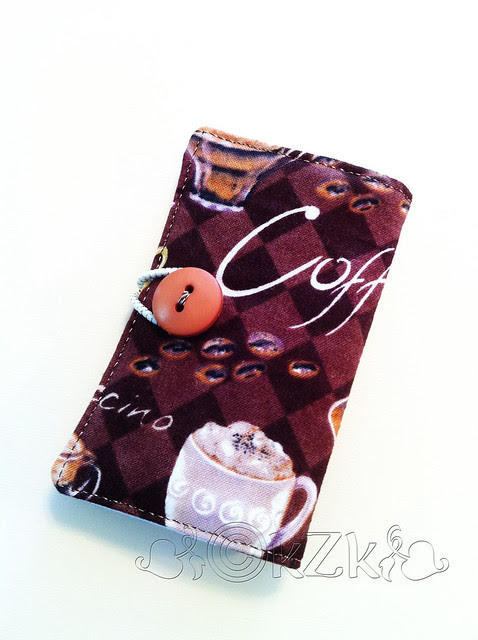 Just large enough to hold a few cards; easy to throw into your purse or stuff into a pocket! 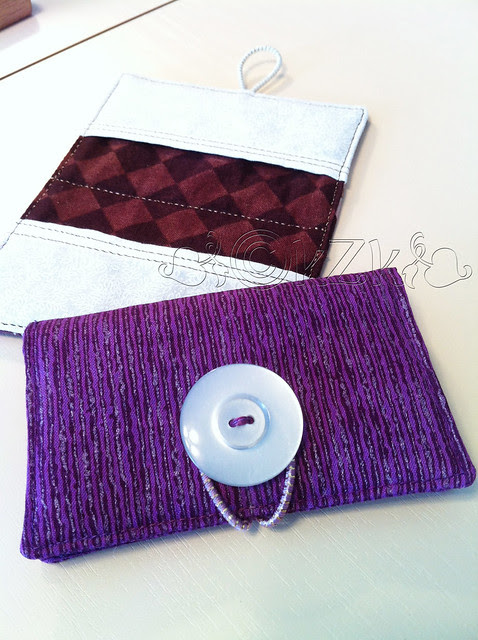 Great way to use some cute scraps and a cool button! 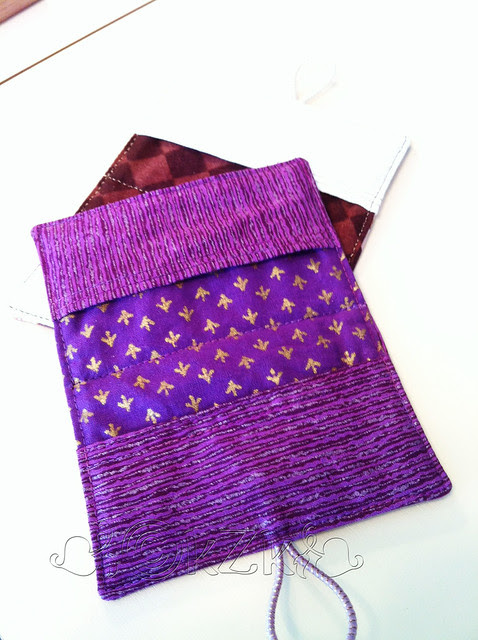 I was really happy with how they came out - thought the tute was very easy to follow!  I will definitely make more of these!

Runner and a "Basket"

Ever have one of those fabrics that you just don't want to cut into small pieces?  (Let's not talk about the ones I don't want to cut at all...)  I've been toting around a LOT of fabs like that, to include a great Christmas fabric in lovely mauves and teals and golds that I bought in Korea. In like ... 1994 or 5 maybe? I was saving it for JUST the right project!

Anywho... a friend of mine (thank you, Bobbie) described how to make a fun table runner that would allow me to keep a good piece of the fabric intact - and I just thought it would be perfect! Take a look: 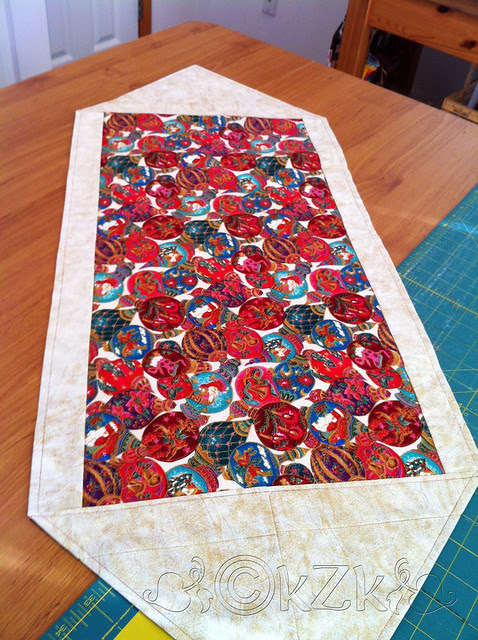 The colors aren't as harsh in person as in that photo.  I paired it with a white with gold metallic fabric that really lets the ornaments shine!  I just think it's gorgeous!

Click here for instructions for a very similar way to make your own.  It's REAL close to how I made this - except for the 10-minute part.  Please.  10 minutes?  I don't think so.  It takes the Guide Dog for the Color Blind and me that long to choose fabrics, let alone a coordinating quilt thread!  But that's pretty much how I made this one.

I thought the colors were a good "fit" with my sister-in-law's decor, so I decided this should go to her and my brother!  I had some fabric left and thought it would be fun to make a little fabric basket to go with it: 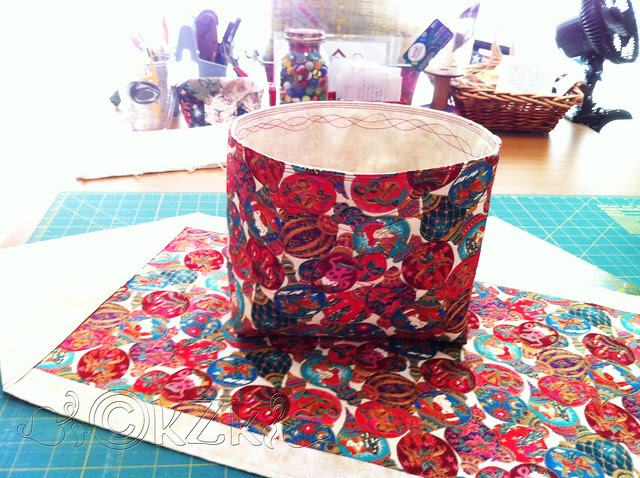 Perfect to hold Christmas cards, ornaments, greenery and lights ... ANYTHING! 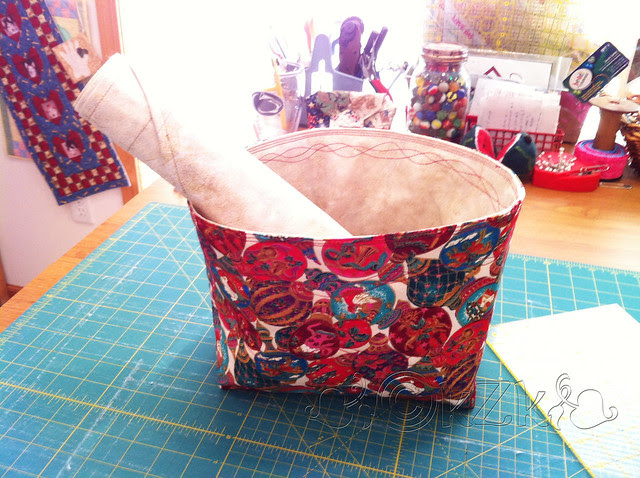 Really, really fun to make!  I hope my s-i-l and brother enjoy them!

My husband is an avid golfer and has a great collection of golf hats from all over the place.  Oh, not a "sit them on a shelf" type of collection, he wears them.  And wears them hard.  I mean - he golfs when it's over 100 degrees out there, so yeah, they get kind of funky.  So I wash them, he wears them ... and I wash them, he wears them ... and before we know it, they really have out-lived their usefulness.  But some of the logos are just SO COOL - so what to do?  I thought long and hard on that for a while, then it hit me.  If I can cut logos out of t-shirts and make a really cool quilt, can't I do something with golf hat logos?  ...except that they're quite crunchy and hard and embroidered on thick, thick canvas ...

I cut all the logos out, grabbed some heavy-duty canvas, and started playing around. 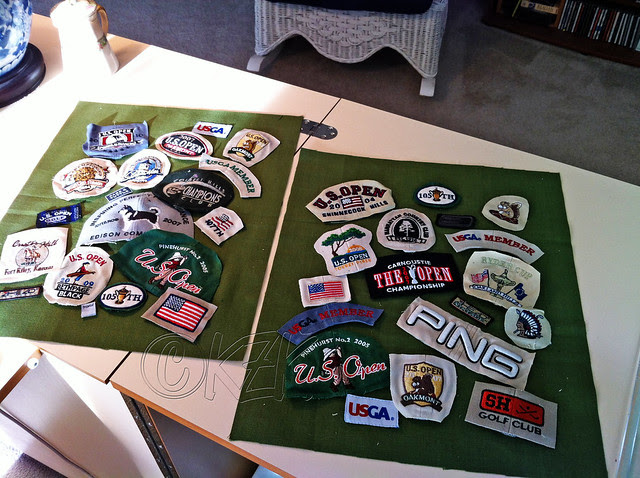 Seriously, some are just way too cool to toss out.

I stitched them onto the canvas, grabbed a cute golf-themed cotton fab for a lining, and made a drawstring bag: 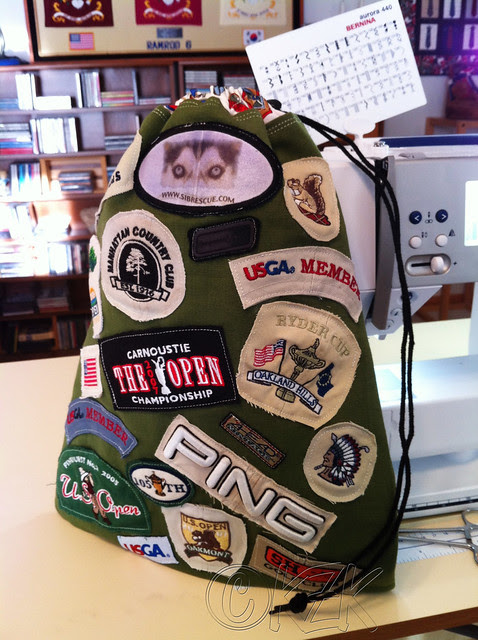 Mike thought it would be great to hold "range balls". I'm not a golfer myself, so I only have a vague idea what that means, but that's OK!  I was just thrilled to have a purpose for the cute designs!  :) 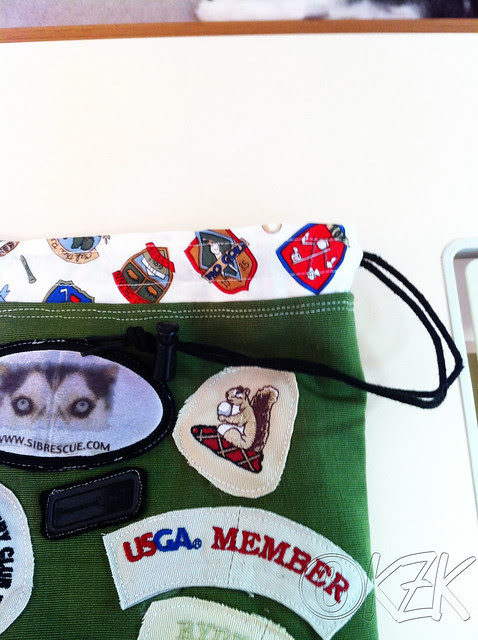 After I had the bag together, I thought it would be convenient to have a D-ring at the top, so Mike could hook it to his golf bag with a carabiner clip.  It would have been better had I come up with that idea an hour earlier than I did ... but it all worked out. 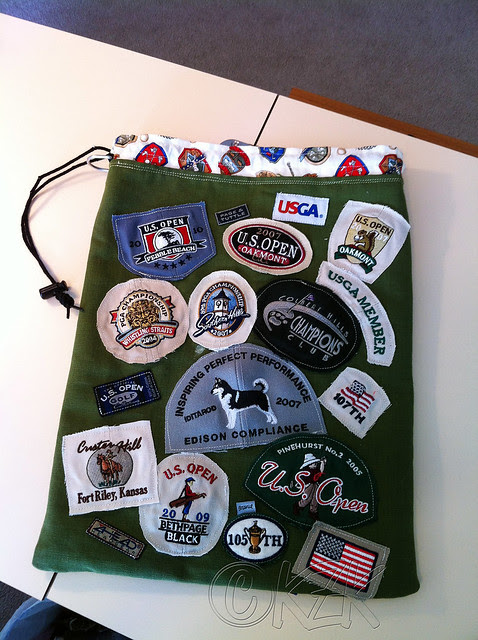 I did some ripping, inserting, then re-stitching.  It was worth it - the D-ring is very handy.


I used some cording and one of those cord-lock things from an old backpack.  I think it's a great touch - I think I need to buy some of those; I like them!