Ha ha ha! OK, I don't think that's what I'll call them - there are no doubt some copyrighting issues involved - but I just had to show these to you! As some of you know, we finally joined the 21st century and bought a couple iPods. Yea! :) They're tons of fun and I have no idea how we did without them.

My hubby said he'd really like a bag to carry his iPod. Cool idea! He asked if I could make one that could loop through his belt (for when he's golfing or wearing pants with a belt) and could convert to one with a long "cross-body" strap for when he's out exercising the Army of Four.

I thought about the HTP! Bag I'd done for Patty with the long strap and thought those little leashes would come in handy again! Check this out! 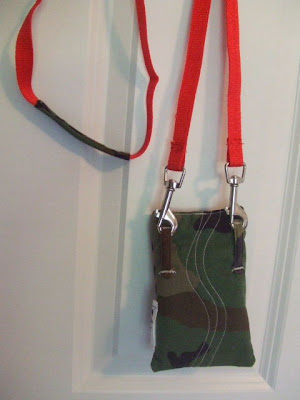 The back of the iPod Pod
He wanted the strap to be removable, for when he wears the iPod Pod on his belt, so I sewed two leashes together and used the clasps to hook the long strap to the bag. VERY easy to remove when he doesn't want it there. The area where I sewed them together wasn't as tidy as I would have hoped for, so I put a cool camo cover on it. :) He can either leave the strap at home or tuck it into the bag when not in use.

As per what the leash clasps are hooked onto ... I took two "keepers" right off an old pair of BDUs and sewed them to the bag after I quilted it. Can you see them in the photo above?

I almost used just one "keeper" (Do you all say "keeper"? Mike swears it's a Pennsylvania thing I picked up from the PA contingent of my family....). Anyway, I almost just used one "belt loop", but I thought two would make the bag more stable. Here it is! 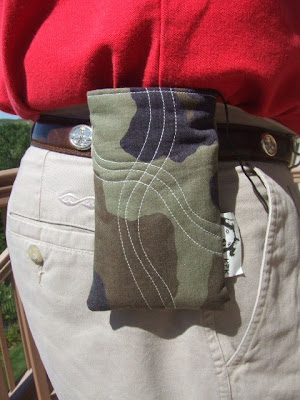 Isn't it cool? He's been using it quite a bit, which is a good sign! In fact, I had a bit of iPod Pod envy... so I decided to make one for myself! I very seldom wear a belt; I just wanted the cross-body strap to wear when the Ao4 take me on walks! No "keepers" needed, and no reason to make the strap removable. Here's mine! 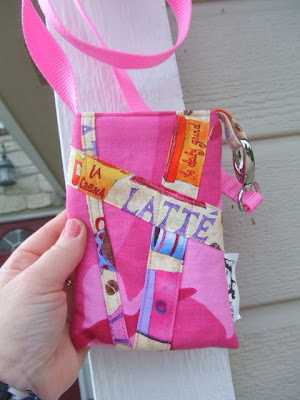 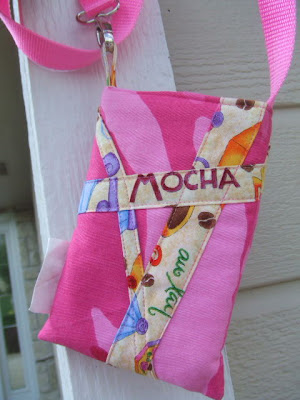 Pink camo and coffee fabs - if this bag doesn't brighten your day, what will?

I love being able to carry my iPod along with me. The bag is actually large enough for me to stick a couple "good neighbor bags" (poop pick-up bags) in there as well as my cell phone. Very convenient! I sewed some Velcro along the top so the iPod won't come tumbling out. Here's a look inside my bag: 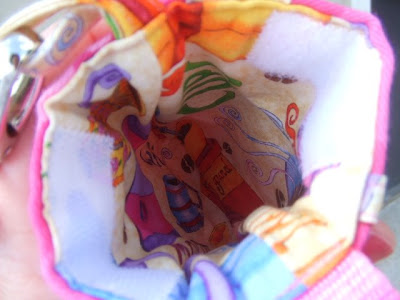 You can see that like all the bags I make, it's fully lined. (Mike's has some cool, patriotic fab inside!) Really, it's just a HTP! Bag made a bit larger... but it's so FUN having an iPod... Pod!

Thanks for reading!
KZK