When I was a senior in high school, my mom hurt her back and had to lay flat in bed for what seemed like an eternity.  It was up to me to take on all household duties.  Most chores (cleaning, vacuuming, dusting, laundry...) were ones I was already well-trained in, but cooking was totally foreign.  To say there was a sharp learning curve would be an understatement.  The whole concept finally clicked for me when my dad compared following a recipe to conducting a science experiment.  That totally put a different and understandable face to it all!  Science (and Math) had been my best and most favorite subject area(s), so it made perfect sense to me and everything fell into place!

Quilting and bag-making has also been much like that.  I think that's part of the appeal of this whole fusing plastic bags together kick I'm on.  It's like a big science experiment!  Too cool!

I've made a couple more bags and thought I'd show you one today.  I did a bunch of fusing, then cutting!


I wanted to see how it would be to piece the bag - more of a patchwork/quilt type of look.

It's a little slippery to sew through, and I found myself inserting the occasional pin (tucking into the seam allowance or along the sewing line -- any hole made in the bag itself would stay a hole!) just to keep things lined up.  It went quite well, though! 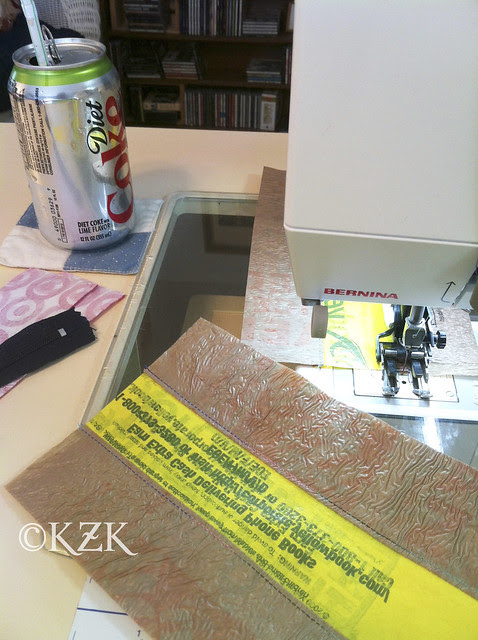 I pressed the seams flat with that wooden presser, as I showed you, then decided to add a line of top-stitching to help keep it flat.  Can you see it in the photo above, in the brownish stripes?

This bag was for me.  I need something to hold my car keys and phone when I go birding/wildflowering; a lot of my outfits lack pockets, so I needed a small, cross-body bag to compensate.  This fit the bill perfectly.  Because it's plastic, it's SO light - I've tested it out and I barely remembered I was "wearing" it.

Here's my supermodel, Cameron, with the finished bag:


Yeah, OK.  I sort of forgot about the bumblebee effect, but that's OK.


I think her brother/mentor was more than happy to see someone else have to model for me.  He did want to be in on the action a bit, though, in case there were treats involved.

I'll post another bag probably tomorrow.  This has been a great experiment!