I know I should finish a few things first... but I can't help it.  I started a new project.  ☺

I got some fabric in for a special project I'm making for my husband - a wall-hanging using small, reprinted battle flags from the Battle of Gettysburg.  (Key battle in the US Civil War, for my international readers!)  One of the fabrics is a large panel of the battle flags - and I also bought some coordinating Civil War reproduction prints in a "layer cake" -- 10" square pre-cuts.  My plan was to cut the battle flags out separately and turn them into quilt blocks to then sew back together.  I decided to throw the flag fab in the wash.  Then I thought... with as unevenly as things shrink, I really needed to wash those layer cakes, too.  I wasn't choosing a pattern that called for precise 10" squares anyway (actually, I'm not using a pattern, I'm making it up as I go along ... but that's our secret!) so I really thought it would be wise to wash the squares.  Best to have everything in the quilt either pre-washed or not pre-washed -- not to mix!

I threw the layer cakes into a little mesh bag, ran it through the washer and dryer, then took it down to the Studio to iron it all.  Remember the post I wrote not long ago entitled "To Wash Or Not To Wash"?  These two squares both measured exactly 10" prior to washing:


Imagine what that kind of shrinkage differential would do to a quilt!  Yikes!

I put my first block together yesterday afternoon after I finished removing all the paper from the Frenzy Quilt!!!  (I'm halfway done with Season 2 of The Rat Patrol, in case anyone is interested!)  All of the blocks will be different, but here's Block 1: 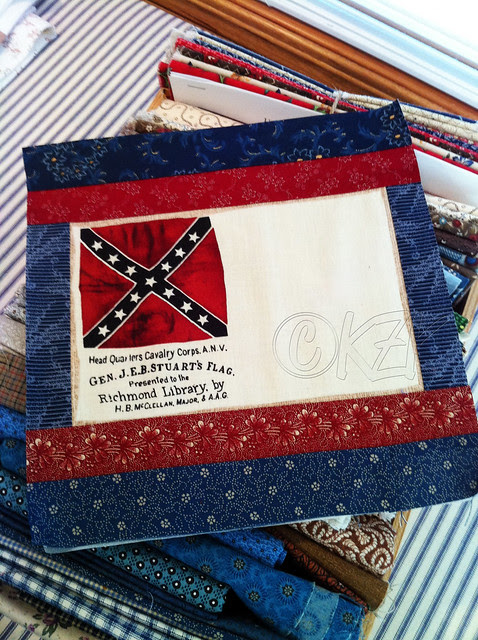 I thought it only fitting I would start with J.E.B. Stuart's flag, as the first high school I attended (of three) was named in his honor!  LOL!  Also, this is the longest of the flags; I want to do the longest and the tallest first.  I'll keep you posted!