The Battle Rages On

Yeah, I know.  I couldn't come up with a good title for the post and I'm way behind on showing you where I am with the Gettysburg Battle Flags quilt.  This is going to be photo-heavy and hopefully not-too-wordy. You heard it here first!

I've kind of lost track what block I'm on, so here are some snippets, suggestions and comments.  For one of the blocks, I decided it would be a good idea to paper piece a sawtooth border. 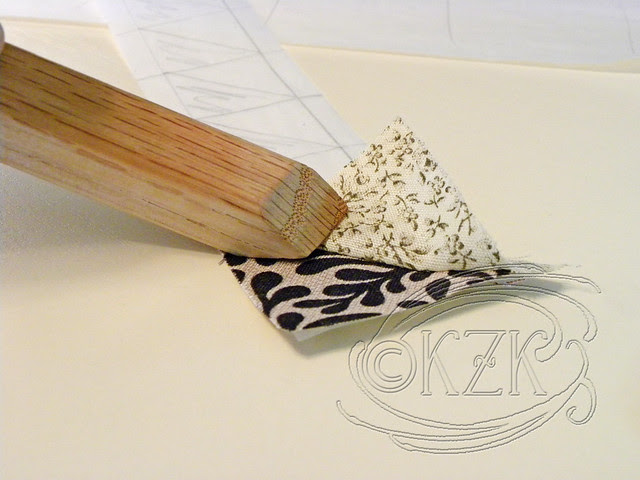 Paper piecers! Do you have one of those little wooden irons? 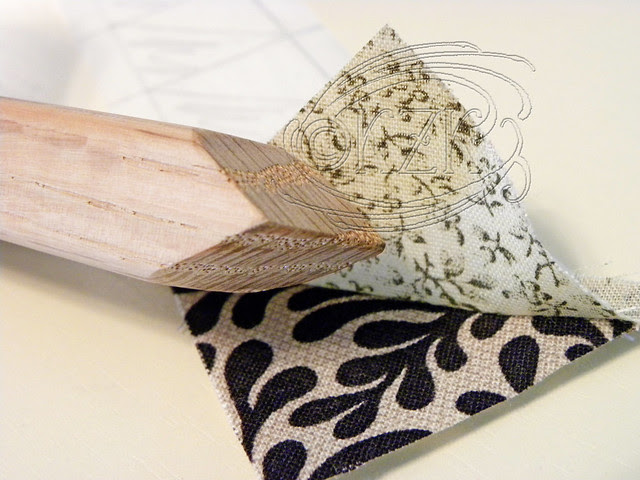 They are great for pressing down the tiny pieces of your paper pieced blocks - so you don't have to keep popping up and running over to your iron. They can be used right or left-handed (THANK YOU!!!) and just have such a nice feel to them! 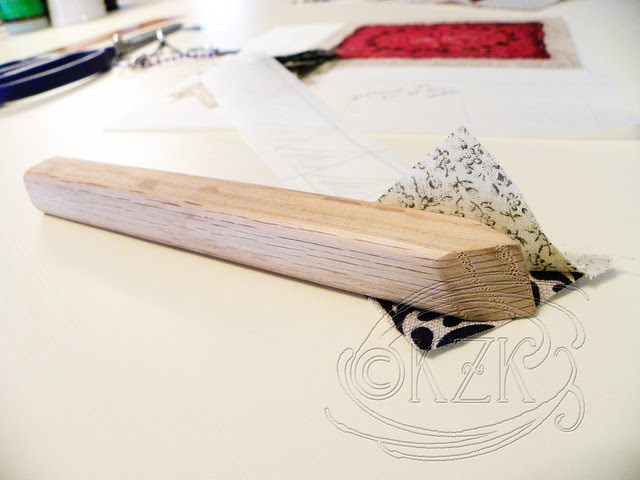 Highly recommended. Use one, and before you know it, you'll have a nice little line of saw...teeth? 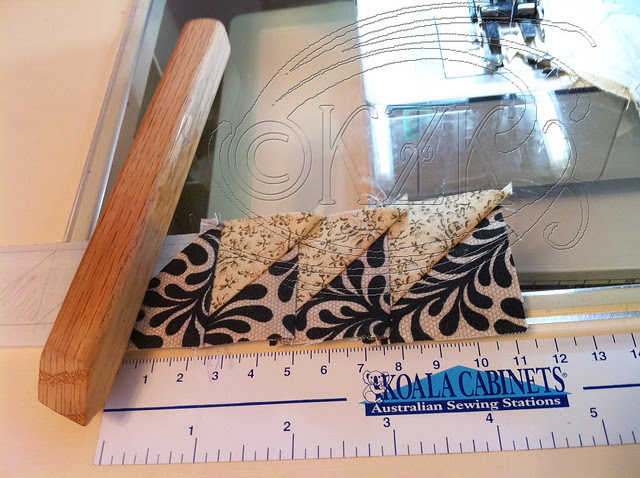 I did a couple rows and put them with this artillery flag: 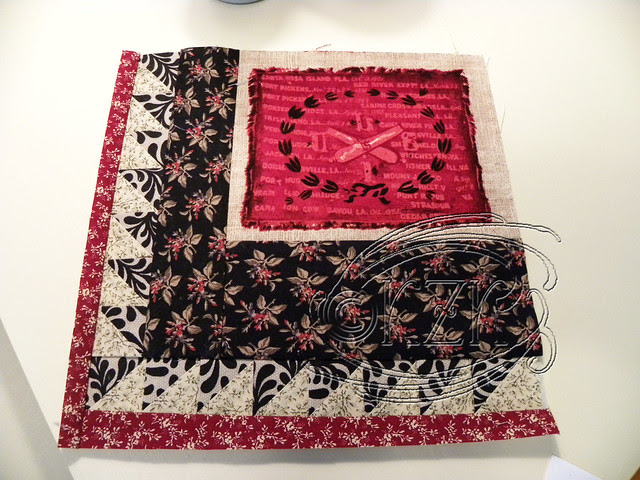 I moved on to some simpler things after that. 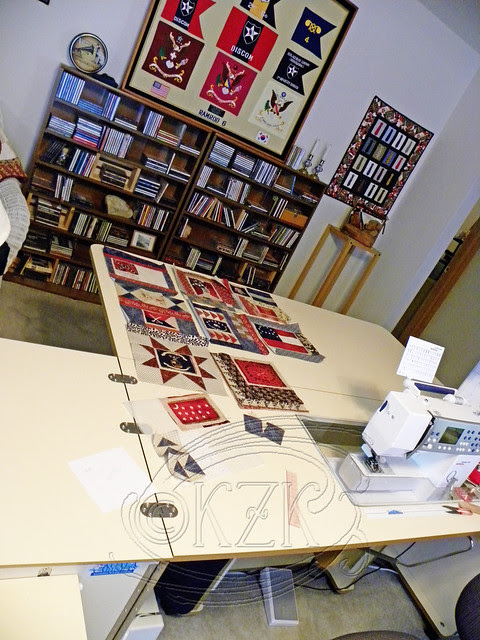 Yes, like totally trashing my sewing table!  Exactly.  I need to find a way to put the blocks up on a design wall of some sort.  Quickly.

My overall aim is to use fabrics and blocks historically accurate to the Civil War era. Well... reproduction fabs, but you know what I mean! I decided to toss in an Indian Hatchet, so to speak. 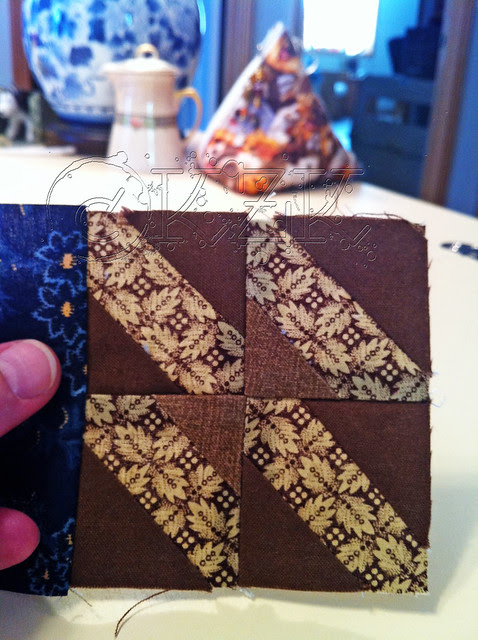 I showed the block to my husband and asked him (with no hinting) to guess the name of the block. He came up with "Battle Axe", so I think it must be pretty well-named! I also made some little Cannon Ball blocks... 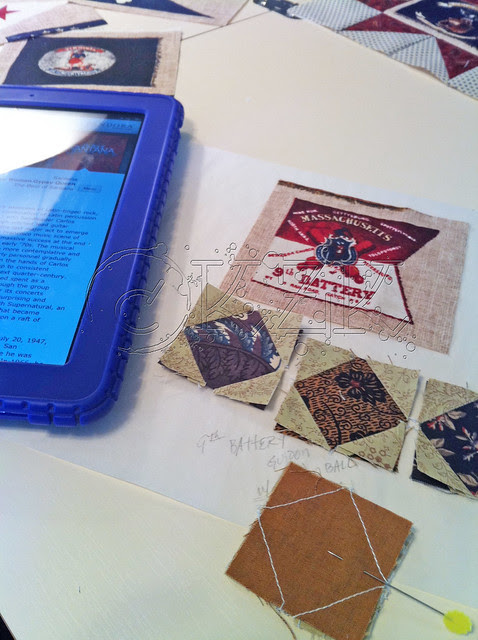 and incorporated them into a block with one of the artillery battery guidons. 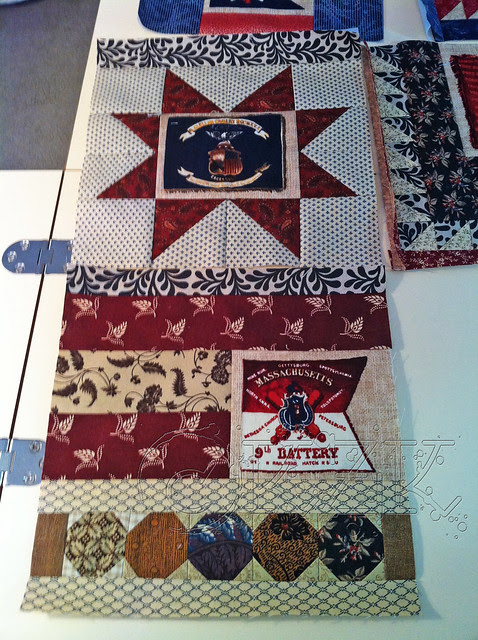 Since the sawtooth border came out so well, I thought I should try my hand at equilateral triangles: 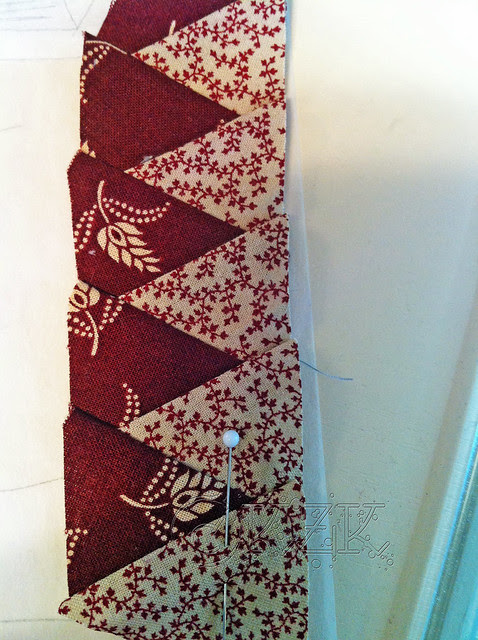 Not a bad idea, per se ... but then I thought I should turn the corner with them. Here's a look at the completed block they live in: 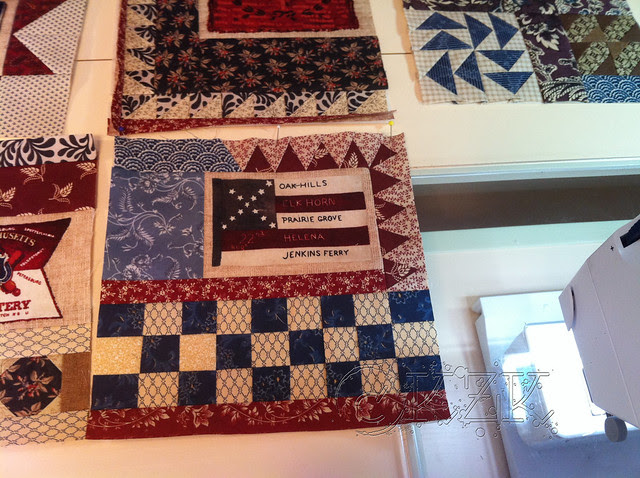 See the upper-right corner?  That's as close of a look as you're going to get.  I ripped it out three times before deciding to leave it.  As I posted to FaceBook, three things to remember:  the Alamo, to be careful with food processor blades and to avoid inset Y-seams at all cost.  What was I THINKING?!?!?  Yeah, OK, it looks pretty cool, though.  From a galloping horse.  And at least I haven't forgotten the Alamo.

Today's goal - a small Ohio Star to put with ... something.  And to come up with a design wall.