The big quilting project I've been working on is in the mail and should arrive at its destination today or tomorrow.  After it's in the hands of its new owner, I'll post pix!  In the meantime, I tried a new recipe that I thought I'd share with you. 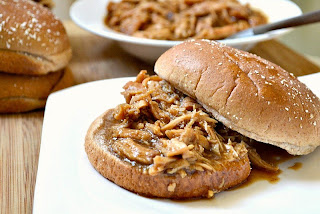 Looks good - and the recipe sounded great! You can click it for the original recipe ... but frankly, I changed it. A ton. So click there, if you must, but then here's how I did it!


Ingredients:
6 frozen boneless, skinless chicken breasts (The recipe called for 3.  3!?!  Use 6.  There's still oodles of sauce.)
1 Tablespoon extra virgin olive oil
1 large onion, chopped (The recipe called for 1/2.  No half measures!)
1 cup crushed pineapple (I drained it a bit.)
3 cloves of garlic, finely minced
3/4 cup whiskey (I used Jim Beam because that's what I had.  It was so old, I don't even remember when we bought it, but I'm guessing it was to put in a cake.)
1/4 cup molasses
2 Tablespoons Dijon mustard
1/4 cup brown sugar
3 Tablespoons lemon juice
1 Tablespoon Worcestershire sauce
salt & pepper

The recipe THEN said to remove from the heat and ignite.  I can't tell you how much I was looking forward to that step.  Setting food on fire!  How exciting!  I was all set with the camera!   Sadly, mine did not light.  Despite many, many attempts.  (insert frowny face here)  I think the alcohol burned off on its own... so next go-round, I won't sauté my onions as long.

OK... if your sauce lights, let it burn for 20 seconds.  If it doesn't, pout, take a picture, and text it to your friend who is also on stand-by waiting to see your food on fire.  (Thanks for being there, Macon Bag-a-holic!)  Add remaining ingredients (except for the chicken), bring to a boil, then turn heat down to low.  Simmer 10 minutes.

The original recipe called for you to strain it and throw out all the lovely chunks of onion, garlic and pineapple.  WHAT?!?  No way.  I left it as is.

Now you're supposed to chill the sauce overnight.  Hmm.  OK, I did do this, but mostly because I wanted the chicken for the next day anyway and it would give the flavors time to mingle together ... but I really don't think it's totally necessary.

The next day, throw the sauce and your chicken in a crockpot.  The directions on the original recipe confused me so really - just cook it on low for 5-7 hours, shred the chicken, let it soak in the sauce for a while, then it's time to EAT!!!

Throw it on a nice, hearty bun, and enjoy! I served ours with some chips (hey! I was quilting all afternoon!) and my cabbage salad.  (If you follow the link to the recipe, I also tossed in 6 ounces of Cherry-Flavored Craisins.)  The chicken was tender, sweet, yet with a little bit of tang. Both the hubster and I loved it!  The only let-down was that I couldn't get it to catch on fire - but there WILL be a next time!  (And yes, I'll have the camera standing by!)

If you give it a try, let me know what you think!