Only Three More To Go!

I'm getting seriously excited now! Putting these little battle flags together has been such a great learning experience! I'm stretching my imagination and creativity and am just having a blast. Your encouragement, suggestions, questions and compliments have helped me tremendously along the way.  Seriously.  Thank you!!!

Sharla left a great comment the other day: "It is coming right along nicely! What do you mean by what size "extras" to add to keep a good balance? Does that mean you'll be adding a border between the squares or is it something to do with the squares themselves?"  Thanks, Sharla! What I mean by extras is anything other than one of the flags! That can be just strips of fabric or pieced blocks! Here's an example of both: 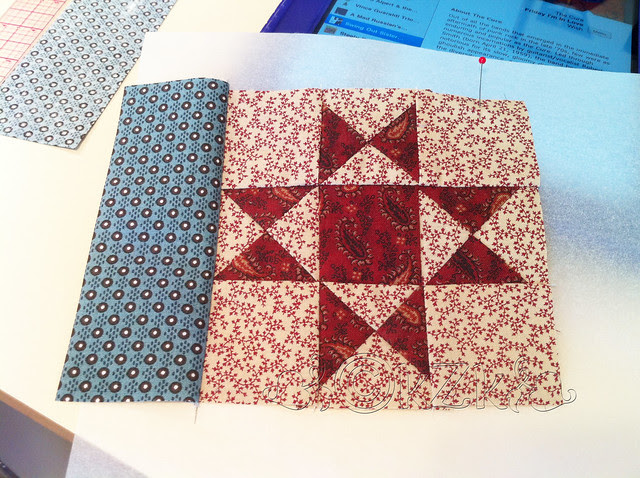 That's an Ohio Star quilt block (my husband is from Ohio and this is a great, traditional pattern -- I "had" to work one in!) and a strip of blue print fab added to the left.  They were added to a 9" piece of paper (LOL!) with a battle flag ... just to round the whole thing out. I thought I had a shot of just that block but I don't. It is the one in the upper left-hand corner here at this link.

There will be nothing between the blocks - the idea I had was for those "extras" to all play together nicely and sort of disguise the fact that the wall-hanging is made from 18 9" blocks.  Hopefully, and time will tell, it won't be overly obvious to see where one block stops and the next starts.  Hopefully.

Here's another example of a completed block: 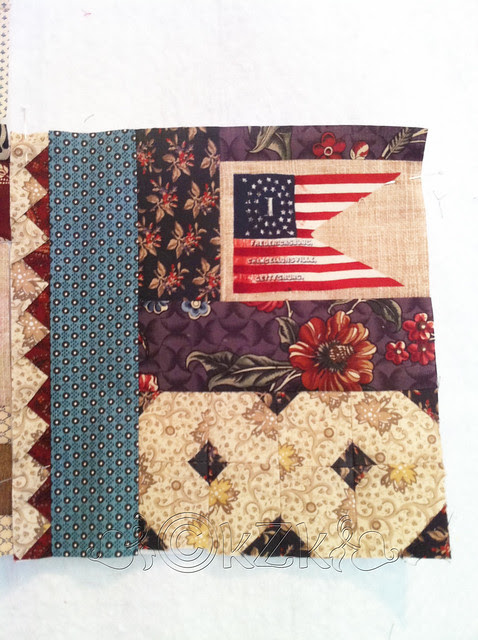 The unit guidon is in the upper right-hand corner.  I added a few different strips of fabric around it - then a sawtooth border along the left side and Kansas Dugout blocks at the bottom!  (We live in Kansas - had to work that in, too!)  (OK... the KS Dugout block is officially from the 1930s ... but I'm sure those little pieces existed in some fashion in the mid-19th century.  Maybe.  They COULD have.)  So everything there except for the guidon I consider "extras".
Putting everything up on my design wall -- 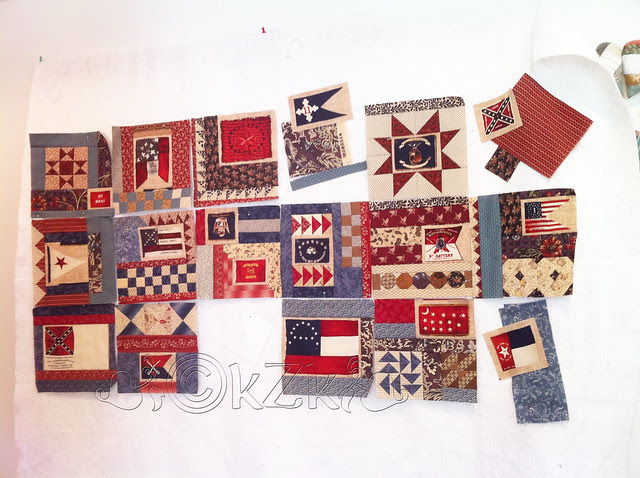 -- helps me see where certain colors might dominate or I might need more of a certain color.  I want to avoid the "Wow... I sure put all the dark blues right there, didn't I?" scenario.  I'm also trying to spread out larger scale blocks or my little sawtooth borders - things like that!

In the photo above, you can se that I started changing things around a little from the previous day's layout - and have decided where certain colored fabrics "need" to go to achieve a little of that balance.  It will most likely all get changed, but that's part of my personal challenge -- staying flexible!

The Commonwealth of Virginia (that's "Vuh-gin-ya", suh!) is one of the states I call "home", so I wanted to do something special with the VA flag: 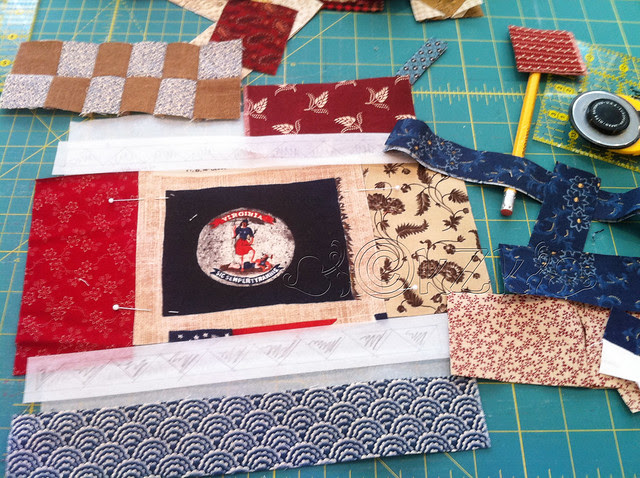 I really can speak with a lovely Tidewater accent when I choose to.  ☺  Moving right along...

My plan was a sawtooth border above and below the state flag, to add in some of that sort of clamshell-looking navy & white print, and to involve a deep red.  Part of the balance.  That was the plan.  Here's how it came out: 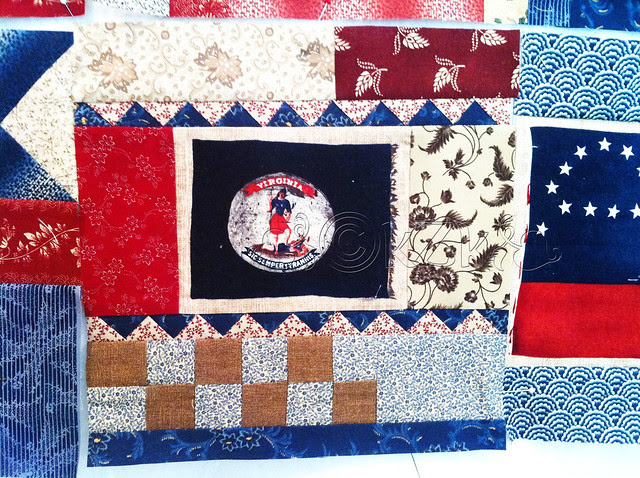 Yeah.  I didn't really need the clamshell fabric - it's right next door there on the right.  I just needed some navy ... so I used it in the sawtooth borders and in a little strip along the bottom.  The brown and blue ditsy-print fabric 4-patches were left over from another block (second from the left in the top row in one of the pix above); instead of running them vertically as in the other block, I ran them horizontally.  Works for me!

By the end of the day yesterday, here's how I was doing: 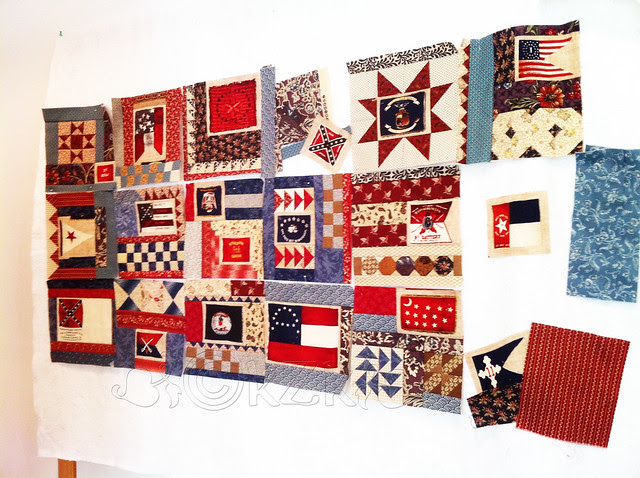