I've been working away on the Gettysburg Battle Flag quilt! My target was to finish quilting it by the end of the week - and actually (grab this!) I'm already sewing the binding on!!! I'm so stoked! Let's do a little miscellaneous photo flash back, OK?

First up, a few pix of block parts that I especially like.

In many old quilts, you'll see similar colors/fabrics substituted in some of the blocks - like in the background of these Flying Geese:


It was usually because they were working off scraps and just plain ran out.  For me, it was partly that -- but also because I think it adds depth.


Don't you think?  It's just more interesting, too!  Like with using variegated thread, it is similar to light playing across the quilt.

As I worked on the quilt, I got caught up in each and every one of the flags or guidons. I thought about the unit, its history, and as an Army wife and Army brat, felt a certain connection. Look beyond my machine in this next one:


When my husband relinquished command of his Brigade (2ID DISCOM), he was presented with "miniatures" of the colors that constituted the units under his command. This set hangs in front of my machine. I loved looking up at it while I worked on the colors from Gettysburg!  It was great inspiration!

That shot is from when I was in the process of sewing the borders on. After that, it was time to choose a quilting thread.


As I mentioned earlier, I went with a King Tut variegated thread -- 920, Sands of Time for those who might be interested. As much as I love some of the bold, richly saturated, vibrantly colored King Tut threads ... the shades in this one are equally exciting. Think of all the colors in a desert - or in a latte. Seriously. That yummy.

After I chose the backing and binding, it was time to baste the quilt layers together.  That means securing the backing, batting and top together so they don't shift while you're quilting.  Traditionally, this would have been done with long basting stitches ... maybe pins ... but for me ...


Yeah.  If women in the mid-19th century HAD basting spray they would have used it. At least for smaller projects like this that they would have machine quilted. Don't you think?  Umm... and masking tape, too, for marking those long quilting lines.

I used masking tape (it leaves no residue!) a little bit to mark the lines - especially in those areas where my chalk just didn't show well enough.  But for the majority of the lines, I used my chalk wheelie thing. 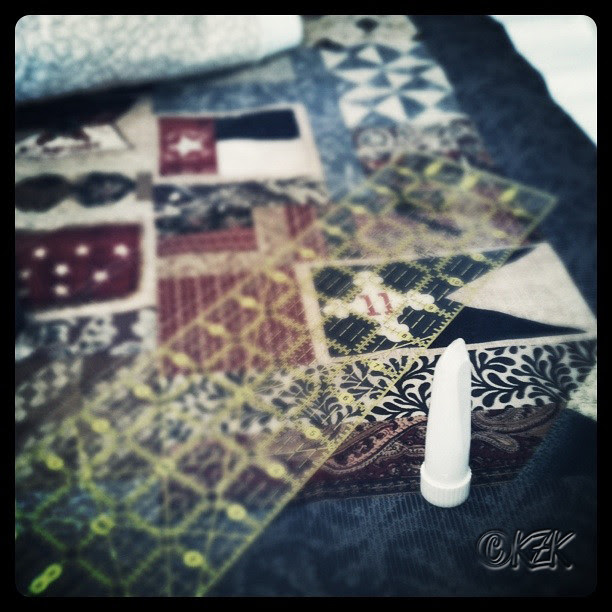 I was about 85% done when my wheelie thing ran out of chalk.  I could have sworn I had a refill somewhere but couldn't find it.  I was very happy that I have a spare wheelie thing in my hand quilting basket.  Whew!  (And yes, of course after I no longer was in the throes of a panicked "where is the refill?!?!" state, I found not one but three refills.  ☺ Of course.)
The quilting went faster than I ever would have imagined, and before I knew it, I was DONE!!!

Next up, sew on the binding! 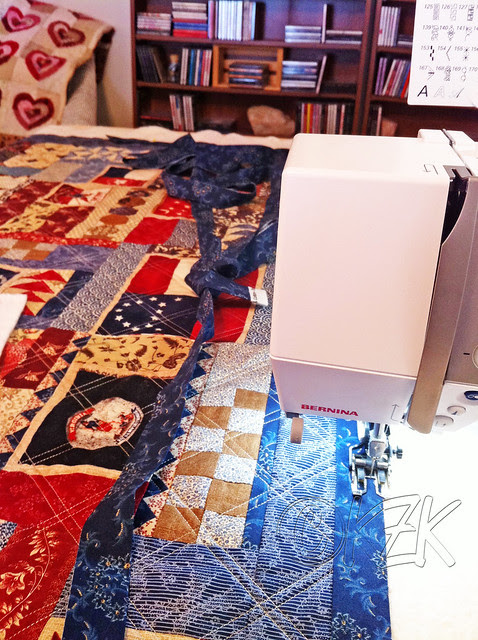 I machine sew my bindings to the front, then trim off the excess batting and backing.  After that, I bring it around to the back and start the hand-sewing process:

Oh!  And two things of note in that last photo:  First - you can see my backing.  That's another Civil War reproduction print.  I really like it.  I wish I had used some in the front, but I didn't think that far ahead.  Second - I left about 1/8" of the batting beyond my 1/4" seam allowance.  I wanted the binding a little more "filled", if you know what I mean.  Just to add a little more dimension to it.