This is probably the most excited I've been about a project, due to all the special touches, people, and effort involved! It all started when I met "the Mala Moms", Jan from Nebraska and Shelly from Iowa. I was already convinced they were both mighty special women, and after meeting them, I was even more certain! I knew I had to do something for each of them.
Jan was relatively easy. I combined her love of my Dave (and hence, the bag named after him) with another of her loves, wolves. She was (is) the first recipient of a Deeve Bag. You can see it at the end of that post. But what to do for Shelly? It's been in the back of my mind for so long! Then ... I posted a picture of Amber with some new fabric to the Siber Mal Society - a very friendly on-line group of Siberian Husky and Malamute owners. Shelly commented that she really liked it - and it's one of those fabs you either love or totally don't love. :) I knew right then I would begin making her a bag.
I asked a not-too-sneaky question about what style of bag she liked best, and a certain someone told me she likes the Ram-a-Lamb. I thought the pink camo would be PERFECT paired with denim! PERFECT! I slowly started working on the bag ... then got a call from Jan!
Jan had been talking to Phyll (in Pennsylvania) and they were wondering if they could hire me to make Shelly a Ram-a-Lamb out of the pink camo. LOL! Great minds think alike, as the saying goes. The concept for the bag was to make it a belated birthday present, a celebration of Shelly's 8th year of surviving Breast Cancer (YEA!), and to express our love for her and Summit, her Malamute. Summi was recently diagnosed with cataracts; while always special, Summi now has some special needs due to his sight limitations.
Phyll wondered if I could come up with a way to spell out Summit's name in Braille - and gave me a link to a Braille website. What a great, unique idea! Here's how that came out, after several misadventures down that road. 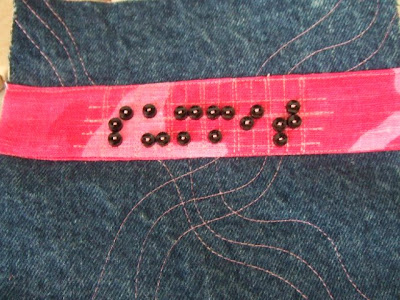 Trust me when I say you don't want to see the first couple ideas I came up with. REALLY. :)

I asked Shelli in Georgia if she would be willing do some machine embroidery for the bag; she is incredibly talented and I knew one of her designs would be the perfect touch. Shelli was more than willing! Thanks, Shelli! I sent her a square of the denim (which, oh, by the way, is from a stack of jeans Phyll sent!) and she got right to it! Here is her Sitka, doing a quality control inspection. 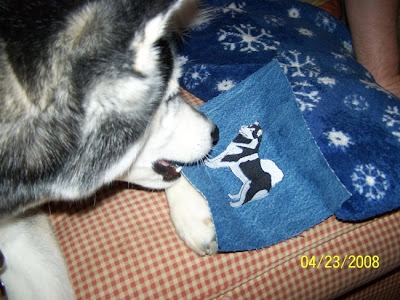 I worked on the Hold the Phone! Bag while the denim went to GA and back. I remembered some CUTE fabric Valerie (in Washington state) had sent me and just "had" to include it! Check out the wild pink leopard print in the HTP! Bag! 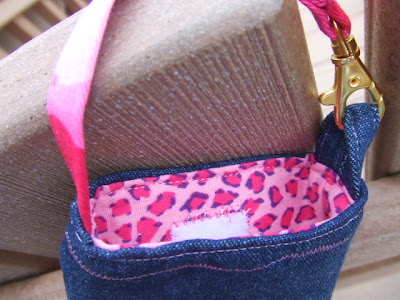 I wanted to add some cool, celebratory reminders of Shelly being a Breast Cancer survivor. I found a lovely silver and cloisonne charm to add to the side of the HTP! Bag, and made a little "ribbon loop" out of some of the pink camo fab. 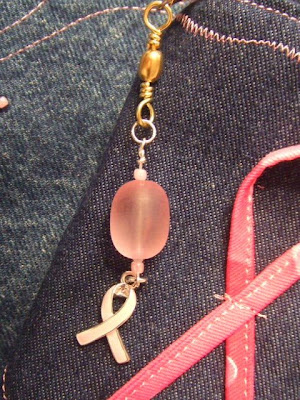 Shelly's Ram-a-Lamb is being delivered personally by Jan! If I time the publishing of this post correctly, the two should coincide. She is presenting the RAL to Shelly on behalf of the whole Siber Mal Society. Jan, I can't begin to tell you how much I appreciate you making this special delivery! I can't wait to hear all about Shelly's reaction and see the photos! 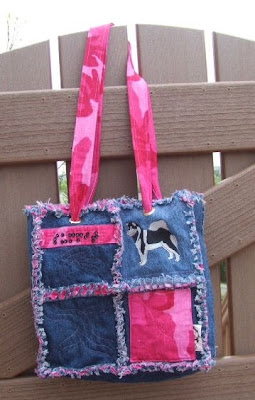 And a close-up of the special blocks: 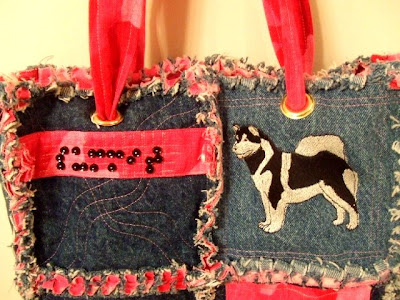 I did the straps like the ones I did for Kathie's Ram-a-Lamb, only the knots are on the inside of the bag. I originally wanted them outside, for more interest, but they sort of blocked the Braille and embroidery blocks, so I reversed them!

I thought it was important to put the Braille block next to Shelli's beautiful embroidered block. It just made sense. The pocket blocks are on the bottom; the bag doesn't sit well if they're on that top tier. Here's a close-up of a pocket: 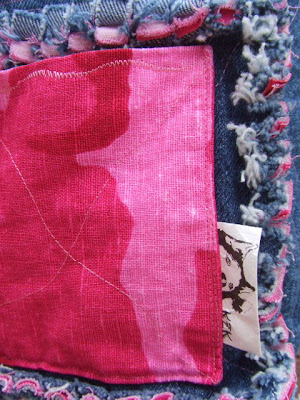 Here's a peek inside! How fun is that? Here's the reverse side of the bag, shown with the HTP! Bag: 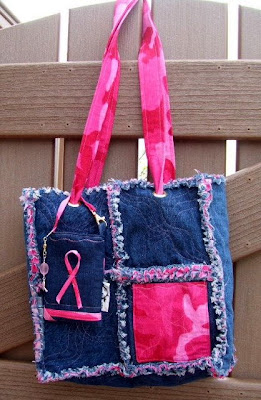 ...and the reverse side of the HTP! Bag: 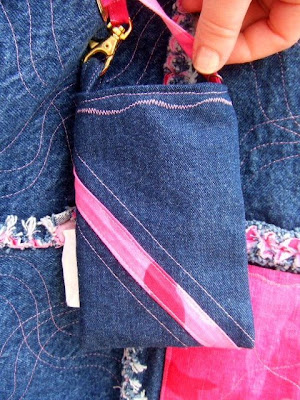 PS: Ironic that it's also our "Ammyversary" - the anniversary of the day we adopted she who the bag was named for - Amber, AKA our little Ram-a-Lamb! :)