I'm back today with some "in progress" photos for you - and pix of some of my choices for the new, improved kitchen.  :)  ("Before" pix were posted yesterday.)

For the countertops, we looked at all the wonderful choices out there and decided the right option for us is concrete!  There is a wonderful business here in town with incredibly talented builders/craftsmen/artisans that we've contracted for most of the work.  After describing to them our vision for the counters (and sharing some pix with them via Pinterest!), Jason came up with a mock-up sample of the counters he will be making for us!


I just love it and toted it all over town with me, so I could choose just the right backsplash to go with it!  (I put it in my Super Shopper Bag, by the way, which was a smart decision.  Did I mention concrete is HEAVY?!?)  I already had a vague idea of what I wanted, which helped tremendously.  Here's what I came up with!


I was also hauling around a spare floor tile.  This back-splash really ties it all together - floor (which isn't as dark as that top pic makes it look...), counters, and paint (White Fog). Very pleased with the choices so far.  Oh. And the sink, too!  I'll have a white Silgranit sink! I do love white! :)

OK... so... as I mentioned yesterday, we're removing the bar-height part of the counter and will have it all one level.  They needed to go ahead and saw that off (basically), in order to make an accurate template for the new countertops!  That's been done - and since Dave was still restricted to "no stairs", he got to supervise.


His brother was downstairs in the office with my hubby, being a tremendous help to him, no doubt. Fortunately neither one of the boys are bothered one bit by loud noises.

Dave made sure they measured carefully during the templating process:

He does have a lot of experience supervising me while I measure and cut in the Quilt Studio, so I'm sure he'd be quite helpful.  From his spot in the dining room.
And so... this is what the kitchen looks like currently: 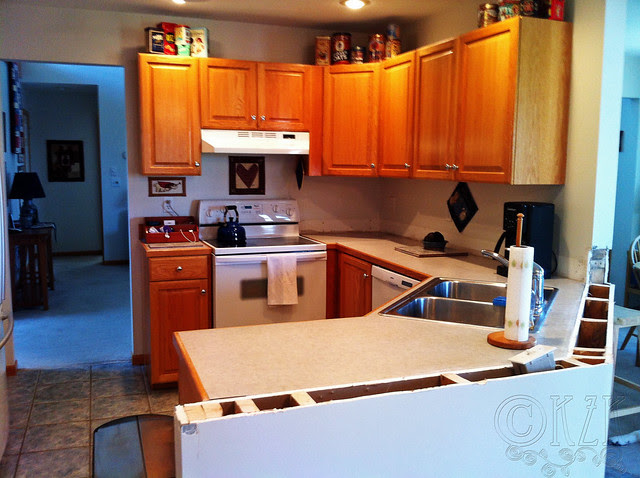 I can't explain how much just cutting that bar-top down has opened things up!  Also, removing the wooden quasi-back-splash was a big change and made the wall between the counter and cabinets seem bigger.  Those tiles are going to look so cool in there!!!  (I hope/think.)  They will go all the way up to the cabinets. 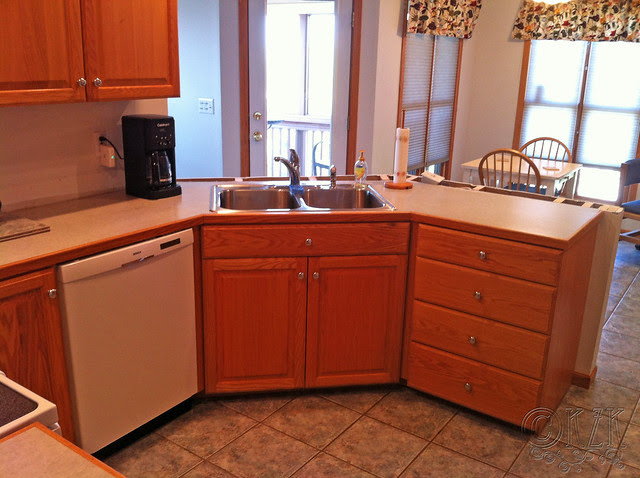 It's mostly a visual thing; it makes the kitchen feel so much larger!

The switch that you see to the right of the paper towels is for the garbage disposal.  It will be moved inside the cabinet, under the sink.  There was also an electric outlet on that sort of demi-wall that held up the bar-top - that will be moved to the wall behind the cabinet drawers.  (It won't work to have it on the side because of the drawers; if it was a cabinet there, it would be a different story.  We did discuss having them install a pop-up outlet that would sink into the counter and disappear when not in use, but it just isn't the right option for me.)

That's all I've got for now.  They are building the forms for our counters and will hopefully be pouring them in about a week and a half - or the week after that.  We'll see.  Installation will come after the concrete  cures - and they'll do all the other work (tile, lights, sink, faucet, etc.) at that time.  I'll keep you posted!