I haven't been sewing lately (still working on sewing the binding on those two other placemats) but I have spent some quality time in the kitchen.  Some of my friends asked for the recipes after I posted a picture on FaceBook ...

We'll start the rice first.  This takes pretty long, so give yourself lots of time.

The intro to the recipe I sort of follow reads: South Africa's oldest rice dish is vendusierys (auction rice) which was later known as huweliksrys (wedding rice) or begrafnisrys (funeral rice). It is simply yellow rice with raisins.

My version of the ingredients/amounts are:

Here are the directions. Now, seriously. I’ve tried omitting a step or two and the rice just isn’t as good. Could you cut back on the amount of water and skip step 5? Could you skip the last part about steaming the rice? Sure. But it won’t taste the same. OH. And your house won’t smell as divine as it does if you follow it to the T. I’ve tried, so trust me.

1.  Heat the water to boiling point in a large saucepan.
2.  Rinse the rice, and place it in the boiling water.
3.  Stir in the salt, sugar and saffron, and add the cinnamon, cardamom and naartjie (orange) peel.
4.  Cover, reduce the heat and then simmer for 20-30 minutes.
5.  Remove the saucepan from the heat and pour off the water. This doesn’t work for me, so I pour it all into a big colander. One with SMALL holes. Really.
6.  Put it back into the saucepan (if you did my step with the colander). Add the butter, sultanas and raisins and stir to blend.
7.  Spoon into a colander. (See? You were going to get it dirty anyway.)
8.  Put an inch or two of water in the saucepan you used for the rice.
9.  Heat to boiling point.
10. Place the colander of rice on top of the boiling water, cover and steam until the rice has swollen and the raisins are soft and plump. 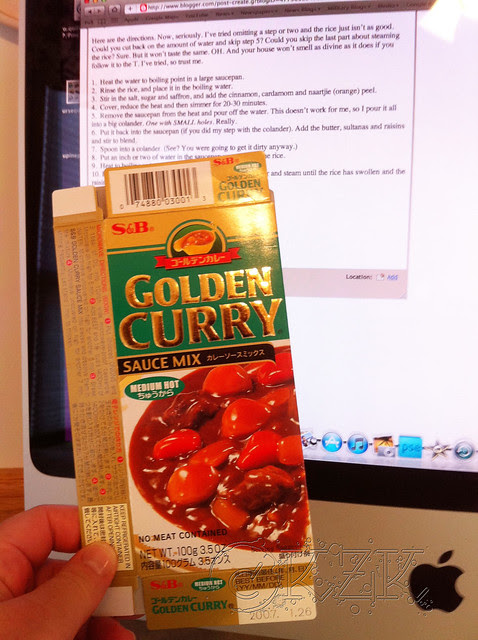 1.  Heat oil in the largest skillet you have.
2.  Add onion; stir fry for a few minutes.
3.  Add the chicken that you've chunked up.
4.  Break up or cut up the Golden Curry mix; add to skillet.  Toss in some water while you're at it.  Maybe 1/2 a cup.
5.  Add in coconut milk, soy sauce, lime juice and brown sugar.
6.  Bring it to a nice bubbly stage and let it all have fun together for about 15 minutes or so - until your chicken has cooked through.
7.  Stir in peanuts, pineapple and basil.
8.  Cook until heated through.
9.  I like to lower the heat, then cover my skillet with a piece of the really wide foil (I don't have a lid that big...) and let it simmer for a while.   You still have broccoli and na'an to deal with.

Throw broccoli in a Corning Ware casserole dish.  Add a couple Tablespoons of water.  Cover with lid.  Zap it in the microwave until it's heated through but still nice and crunchy.  Drain and sprinkle with lemon juice.

Here is my secret recipe for na'an.   Keep it between us, OK?

Send The Super Shopper to Dillon's (grocery store) earlier in the week.  Ask him to please bring home some na'an.  Thank him profusely.

Heat oven to 400.  Put na'an on some no-stick foil and sprinkle with a tiny it of water.  Bake for 2-3 minutes.  Flip it over, sprinkle a little more water on top, and bake again for 2-3 minutes.  (It's also great thrown on the grill, but I'm averse to grilling on my west-facing deck when it's 108℉ in the shade.  Of which I have none at that time of day, so it's actually a million degrees out there.)

I'm happy to announce we're having leftovers of this tonight.

Until next time - bon appetit and thanks for reading!